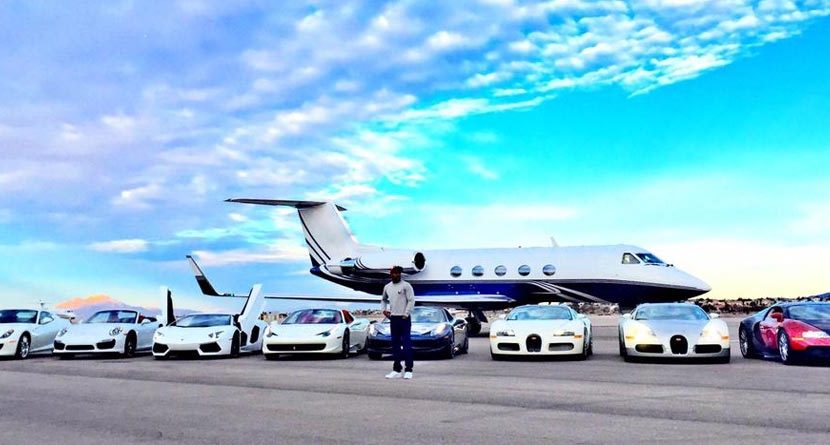 There’s a reason why they call him Floyd “Money” Mayweather, and that’s because he has a lot of it. When he’s not out buying his 15-year-old son a gold Bentley golf cart or winning fights, he’s sharing with the world his insane collection of expensive toys.

Typically, Mayweather shows off one or two of his cars in a photo, but not this time. Surprisingly, for a guy with an outgoing personality of sharing his affluence on social media, he’s never posted anything like this one. Welcome to Floyd’s world, everyone.

Welcome to my world pic.twitter.com/GwSJ4OC4Yj

If one were to guess how much everything in this photo is worth, what would the number be?

Nope. Try $287.94 million. Of course, that’s including his estimated networth of $280 million alone, but according to Business Insider’s calculations, the rest of his rides — private jet included — are worth $7.94 million.

Of that $7.94 million, $5.94 million is made up of some of the most exotic cars in the world. Those would be three Bugatti Veyrons, three Ferraris, a Porsche 911 Turbo Cabriolet, and a Lamborghini Aventador LP 700-4.

Tack on an extra $2 million for his private jet and you’ve got yourself one of the most expensive photos you’ll ever see.

His rides wouldn’t exactly make our list of outrageous cars owned by athletes, but the collection as a whole is fairly ridiculous. Just don’t be surprised if Mayweather breaks the bank and buys one (or three) of the most expensive cars from 2014.