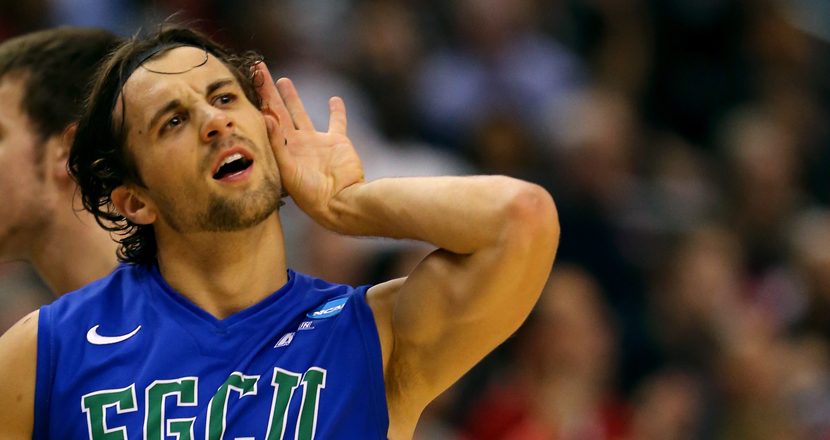 If this year’s NCAA Tournament has taught us anything it’s that anything is possible.

We’ve seen Wichita State take down No. 1 Gonzaga, LaSalle make their way to the Sweet 16 via the play-in game, Florida Gulf Coast going all Harlem Globetrotters on Georgetown and San Diego State, as well as Aaron Craft and Ohio State escaping two straight games with threes at the buzzer. The list goes on and on.

The one thing we should all be able to agree on is that rooting for the underdog is way more fun. Regardless of what you picked in your more-than-likely dismantled bracket, stories like those of FGCU, Wichita State and Oregon, are what make this tournament the greatest sporting event in all of sports.

Handicapping the games throughout this tourney has been pretty much impossible. Your safest best is to take the points and take as many as you can. Underdogs have been covering the majority of the time so, taking the points you’re given has been a pretty safe play.

Let’s take a look at Friday’s match-ups in the order which they will be played:

Midwest Regional Semifinal — No. 1 Louisville vs. No. 12 Oregon: Louisville, like their (former) Big East counterpart Syracuse, is a very confusing team. At times they look unstoppable. At other times they like extremely flawed and clearly beatable.

Thus far in the tournament, they have been the team that all of the “experts” expected them to be. Tenacious full-court pressure. Transition offense caused by forcing turnovers has always been one of Rick Pitino’s calling cards. There is no hotter team in the world now that the Miami Heat finally lost. Expect Louisville to take care of the Ducks in this one but, take all 11 of those points!

Oregon is a baffling No. 12 seed. They won the Pac-12 tournament and, at 28-8, looked more like 6 or 7 going into Selection Sunday. They’ve clearly been playing with a bit of a chip on their shoulder. With an average margin of victory of 15 points through the first two games of the tournament, the Ducks will put up a fight and could very well take down the overall No. 1 seeded Cardinals. Catching 11 points seem ridiculous. Look for this one to be closer than expected. In the end, Louisville has too much firepower.

South Regional Semifinal – No. 1 Kansas vs. No. 4 Michigan: Ah, Michigan. Another example of a team that is damn near impossible to figure.

The Wolverines started the year looking downright unbeatable by getting off to a program record 16-0 start. However, they lost their identity a bit in the middle of the season. The Big 10 was a brutal league all season long. They even stumbled on the road at Penn State, who hadn’t won a game in conference play prior to pulling off the huge upset.

As we covered in the pre-tournament jargon, Michigan’s back court is arguably the best in the country, and they are playing like everyone expected them to so far in their first two contests. Trey Burke and Tim Hardaway, Jr. have been diabolical in two blowouts of South Dakota State and VCU.

Kansas is a similar team. The Jayhawks tend to struggle offensively, as they showed in the first half of their eventual win over North Carolina. When they are clicking on the offensive end, Kansas’ defense is ferocious enough to carry them to a National Championship. This is a true powerhouse match-up. Kansas is a slight favorite at -2 but, look for Burke and Hardaway to continue their stellar play, and Mitch McGary to establish the inside game and make Jeff Whithey’s life miserable all night. Michigan marches on.

Midwest Regional Semifinal – No. 2 Duke vs. No. 3 Michigan State: A coaching match-up for the ages here folks. These two guys, Tom Izzo and Mike Krzyzewski, have a couple of the best resumes in all of college basketball.

There’s no need to get into specifics, but what is most intriguing about this game is the contrasting styles of play. On one hand, you have a team in Duke who relies on dribble penetration to get open looks for guys like Seth Curry, Quinn Cook, Rasheed Sulaimon and Ryan Kelly. Kelly is a lethal weapon who is capable of stretching the floor in ways that make pros like Dirk Nowitzki so dangerous.

Mason Plumlee will have his hands full in the post dealing with MSU’s monster Derrick Nix. Michigan State wants to grind you out on defense and make Duke’s guards uncomfortable all night. The “experts” are handicapping it at Duke -2 which seems pretty reasonable. Tough one to call but, in the end, Izzo and his Spartans are too physical and will make just enough shots to pull away from the Dukies.

South Regional Semifinal – No. 3 Florida vs. No. 15 Florida Gulf Coast: And here we go! The most incredible and unlikely run to the Sweet 16 in the history of college basketball that has taken the world by storm: the Florida Gulf Coast Eagles.

Is there a more lovable team on Earth? FGCU has shocked everybody, except themselves. They blew Georgetown and San Diego State out of the water, and they did it with a bravado that no No. 15 seed has ever shown. It seems like the Eagles only score off of ridiculous alley-oops and threes.

Point guard Brett Comer has been putting on his best Pete Maravich impression in the first two games, averaging 12 assists per. Swingman Sherwood Brown has emerged as a star, putting up 23 points in both of their first contests. What is most alarming about this game is the fact that FGCU is catching 13 points! Are you kidding? Take every one of those points. The Eagles are not only confident, but they’re talented enough to continue this miracle run. Admittedly, this is more of a hopeful pick from the heart but, the Cinderella story will live on! FGCU keeps dancing.

If we’ve learned anything it’s that we know nothing. No one is safe. No team is that much better than the next. There is no overwhelming favorite in this year’s tournament so, be prepared to be amazed yet again. Fly eagles! Fly!

Disclaimer: Refer to earlier column regarding Final Four picks. Any and all advice is most likely wrong and the prediction jinx will probably continue and all of these games will have the opposite turnout. Gotta love March Madness baby!