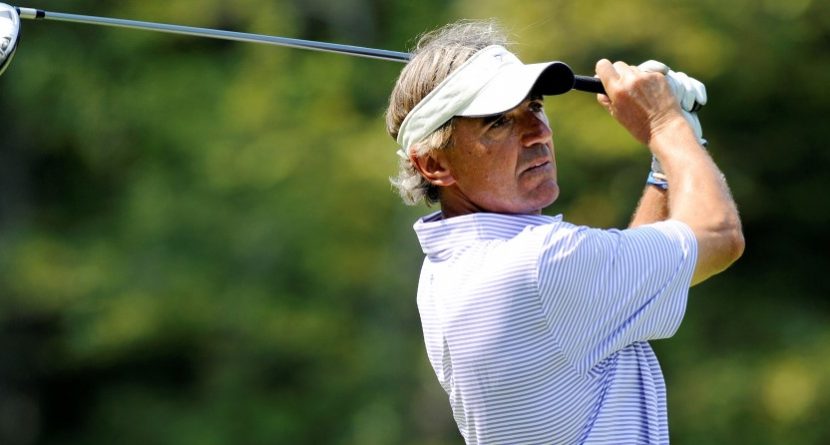 Early last year, Seth Waugh stepped down as the CEO of Deutsche Bank Americas. Last fall, it was rumored that he could be the man to take over as PGA Tour commissioner once Tim Finchem’s contract runs out in 2016. So it appears Waugh could land just about any gig he’d like in business or golf.

But if he had his wish, he might be a caddie for as long as his body would hold up.

Since leaving Deutsche Bank – where he was largely involved in putting on the Deutsche Bank Championship, the second leg of the PGA Tour’s FedExCup playoffs – Waugh took up writing a column for Golf World magazine. In the latest issue, he penned a fantastic piece about his recent adventures on the bag for his son, Clancy. Clancy is beginning his freshman year at Wake Forest, currently 77th in AmateurGolf.com’s U.S. rankings. The youngster looks to have a promising golf career ahead of him, one that may soon require a full-time caddie. To make it big, he may need a professional looper who boasts professional experience. But Pops would be there in heartbeat if Clancy asked.

Seth left his digs at Deutsche Bank in large part to spend more time with his family, and especially with Clancy, who was a senior at The Benjamin School in Palm Beach Gardens, Fla. Seth wanted to caddie for Clancy, but only if his son wanted him. Somewhat surprisingly to Seth, the teenager did.

More surprises followed. Seth and Clancy used to kid about parents who made it a point to say “we” when describing their child’s golf game. Then, after a few events by his son’s side, Seth found that he began doing the same thing. “Dad, it’s OK to say ‘we,'” Clancy told him. Caddies can always say “we.” Seth wrote that the moment was “the greatest gift he gave me all summer.”

What other sport can do that? Sure, fathers can coach their sons, or take them to a ball game. Only in golf can a caddie/parent be right out there on the course with his son or daughter.

Although, Seth is a coach too. One of his other gigs this past year was as an assistant for Clancy’s high school team. But being on the bag are the memories this exec will cherish most. “Battling side by side inside the ropes was the most fun I have ever had while fully clothed,” Seth wrote.

Naturally, the Waugh’s enjoy playing the game together as well. And while they may not yet be able to brag of classic holes-in-one stories, they can boast of back-to-back eagles. The duo accomplished the feat in June 2009 – when Clancy was 14 – on the par-4, 375-yard 17th hole at National Golf Links of America in Southampton, N.Y. The kid holed his wedge shot from less than 100 yards out, and Dad followed up with the same.

These are the moments fathers dream of. Only a lucky few actually get to experience them.