Golfer At S.C. Resort Charged With “Molesting An Alligator” 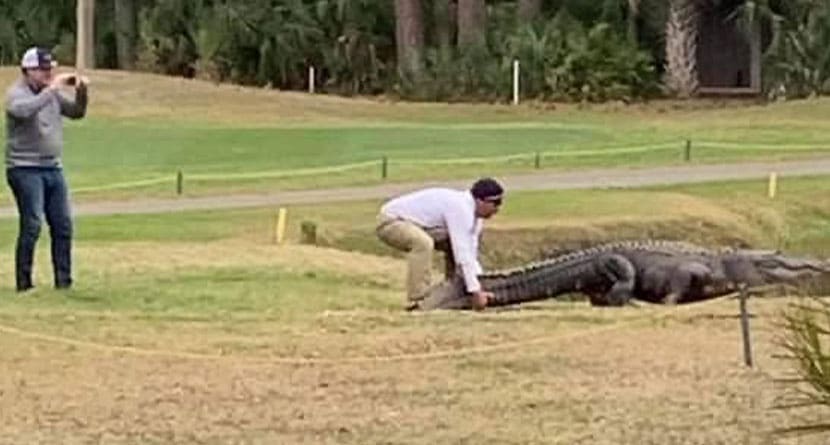 A golfer at South Carolina’s Fripp Island Golf & Beach Resort has been identified and charged with “molesting an alligator” after a photo was posted to the resort’s Facebook page urging guests to not disturb the wildlife.

The photo depicts the golfer picking up the tail of an alligator near a lake on one of Fripp Island’s golf courses while another man looks on and takes a picture.

“Fripp Island Resort would like to remind all of our residents, guests, and visitors that Fripp is a wildlife habitat,” the resort’s Facebook post said. “Harassment, enticement, or feeding of wildlife is both illegal and dangerous.

“We are sharing this incident in hopes that the violators will be found, not to encourage this behavior.”

The violator was, indeed, identified, according to a report from The State in Columbia, S.C.

The South Carolina Department of Natural Resources identified the man in the photo and said he would be charged with molesting an alligator, a misdemeanor that carries a fine between $100 to $150 or 30 days in prison.

“It’s against the law and this guy is going to pay a pretty hefty price,” said department spokesman David Lucas. “But the safety issue is so much more serious than that. You could lose your life.”

Fripp Island has a history of resort guests interacting with wildlife and it didn’t result in a misdemeanor.

In 2013, a golfer at Ocean Creek Golf Course on Fripp Island had his arm bitten off when he leaned down at the edge of a lagoon to pick up his ball and was attacked by a 400-pound alligator. The Ohio man received a confidential settlement, according to The State.