From Sea to Shining Sea: One Military Veteran’s Golf Quest 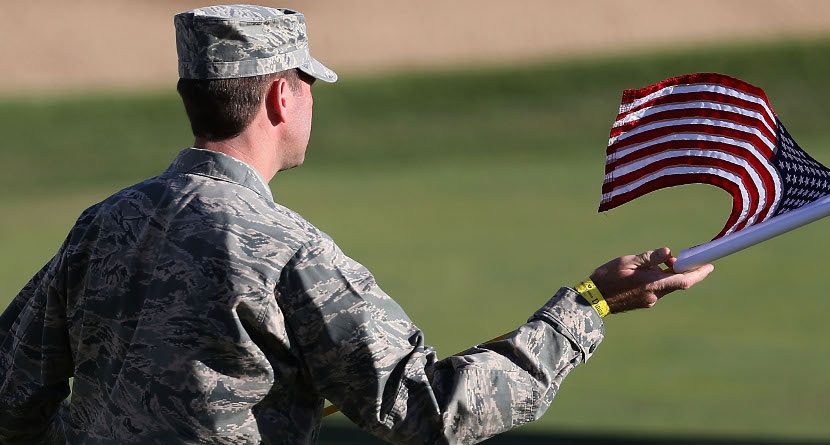 On this July 4th, it is important to remember those who have served our country to protect the freedoms we all enjoy every day. With our veterans’ hard work comes a unique perk: the chance to play hundreds of military base golf courses across the nation. For one man, however, these courses marked the beginning of an amazing story about loyalty, commitment and friendship.

John Zook is the type of guy you’d love to sit down and have a beer with at a neighborhood dive.

The retired military veteran is a joyful, boisterous fellow who, at well over six feet in height, towers over most anyone. Speaking to Zook is like conversing with a friend you’ve known for years despite having just met the man. He is friendly, engaging, and a gentleman to the core. It is truly evident that he is a man highly respected by his peers, both civilian and those in fatigues.

What is most interesting about Zook, however, is neither his demeanor nor his respect for our country. It is his undying commitment to complete a mission he started almost a decade ago: playing every military golf course in the United States.

It all started with a love for the game of golf that has stood the test of time and life experience. While he is hesitant to describe the sights and sounds of a career serving our country in the military, Zook attributes his engrained sense of discipline to his upbringing and experiences in the field.

“You might say I was trained to do something like this,” Zook told me during a recent phone conversation. “It takes a lot of patience and dedication because, heck, there are a lot of courses to play.”

For those who don’t know, each branch of the United States Military – the Army, Navy, Air Force and Marines – lays claim to a number of golf courses on its respective military bases. While many of these courses are open to the public, the majority are reserved solely for military personnel. Consider it a perk that comes with the sacrifice.

How many of these military courses exist? At the time of this writing, there are roughly 185 different 18- or nine-hole courses across the country.

Playing nearly 200 golf courses is a tall order for any man to do by himself. Assisting Zook with fulfilling his quest are his long-time friends and ex-military brethren LTC Thomas Wilczak, COL Bill Logel and LTC Dennis Cassaza. Each man has either accompanied Zook on one of his many golf rounds or has played a military course as a single.

“As much as I would love to eventually see and play every course, having a team help with this goal makes it that much more achievable,” Zook acknowledged. The mission began in 2010 in the form of a Chicago-to-Phoenix road trip. The group would ride through a number of military bases during the drive, including stops in Kentucky, Mississippi, Georgia, Florida, Louisiana, Texas, New Mexico and Arizona. Let’s just say they took the scenic route.

In 2011, the mission expanded to other areas of the Midwest. In the process of playing as much golf as possible, the group took in the sights of the country, including painted deserts, massive forests, plains and mountains.

Military golf courses haven’t always been seen in a positive light, however. A 2012 article published on PGA.com questioned the amount of taxpayer dollars that go into maintaining each course annually. Contrary to what the PGA article may lead you to believe, Zook assures me that no taxpayer dollars are ever used on any military golf course. If anything, veteran and family donations help keep these courses running. Many of the courses are located in areas of high land value, which can appear a bit pompous or arrogant, depending on your political views.

In the article, a Hawaii-based course – Kaneohe Klipper Golf Course, which Zook has yet to play – was profiled as a favorite leisure spot for President Obama. Yet another publication, Salon, expressed its disapproval of these expensive-to-maintain courses, calling them a “luxury that is out of reach for the ordinary American.” Of course, as the PGA article correctly points out, getting shot at in a combat zone is also something the “ordinary American” is unlikely to experience.

In the midst of a government shutdown, when focus on political spending is more evident than normal, many financial experts point to closing military golf courses as a “no-brainer” solution to recouping funds. It is true that many of these courses charge visitors greens fees lower than market value while continuing to pay for course maintenance at regular prices. At the end of the day, of course, the question becomes whether these courses are meant to produce revenue for the government or to serve as a benefit to the men and women of our military.

All politics aside, Zook’s quest is more a testament to one man’s love of a game that undoubtedly brought him serenity following a military career that was anything but relaxing. Each military golf course is equipped to offer these brave men and women everything they need to enjoy their afternoon, including golf club rentals, driving ranges, practice facilities, golf lessons (many complimentary) and extremely affordable greens fees (most range between $10-$40 for 18 holes).

Keeping track of where Zook and his team have played also proved to be a difficult task. With what started out as a “we’ll see how far we get” goal that turned into a multi-state journey, Zook knew that he needed an organized method of tracking his progress. To do so, Zook created a simple spreadsheet that listed every course in every state, including phone numbers, addresses and player exclusivity.

While the experience of visiting nearly 200 courses on military bases is rewarding enough, Zook and his team added a stipulation to their goal: to collect a golf ball, scorecard and ball marker coin from every course they visit.

“Chances are many of us would never see these courses again in our lifetime,” Zook explained. “At the very least, the golf balls could remind us of how far we’ve come.”

To date, the foursome has collected over 125 logoed golf balls, coins and scorecards during its quest. Most often, Zook spends his time at home enjoying time with his family and friends. While he and his team of ex-military golf fanatics still have a handful of courses to play – specifically those located throughout Alaska – Zook’s goal seems more realistic now than ever before.

“It has been a fun, wild ride up to this point,” he admitted. “None of us will ever forget it.”