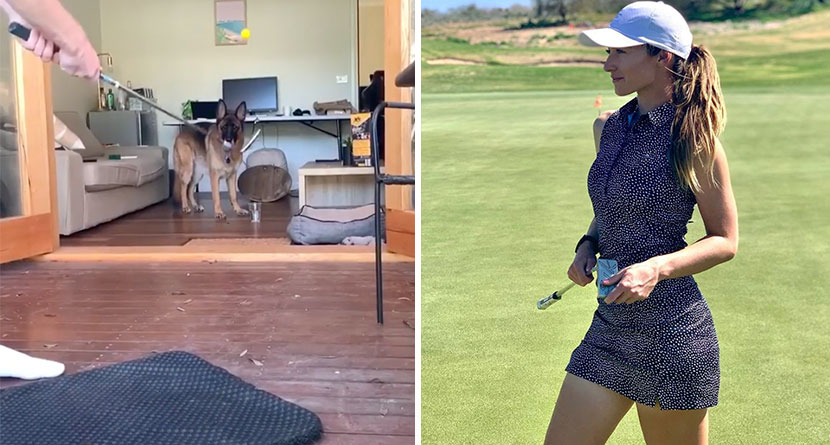 John’s buddies were going to be out of town for the weekend, so he decided to go down to the golf course and see if any group might need a fourth member. Sure enough, there were three women that said they would bee glad to have him join them.

Dogs Are Better At Trick Shots

When the human is taking too long to make the shot. ? Via: @johnwwalker_

Those sunsets hit different when you’ve been locked in the house all day?. Lately I’ve been more grateful for the beautiful sunsets ⁣ ⁣ outfit: @revolve x @lovewave

Today marks day 15 at Pinehurst. It’s been a wild & unexpected ride. I’ve played hundreds of holes alone, driven to the White House and back, worked with the @pinehurstresort staff to raise nearly $300k for the employee relief fund, witnessed the girlfriend play her first 9 holes ever during a much needed reprieve from work (she’s a nurse/hero ?), hit hundreds of horrific shots (filming most of them myself) and a few good ones, and recorded several @foreplaypod’s via video chat with the guys. Been alone a lot, yet felt right at home surrounded by the Pinehurst family. What a special place. I packed my bags and fled NYC over 2 weeks ago with no clue what to expect. Boy have I been lucky. Stay safe, folks, and we’ll keep doing our best to provide some entertainment as we all collectively get through this ?

Me, eyeing that guy who has iron covers ??