VIDEO: The Worst Feeling In Golf 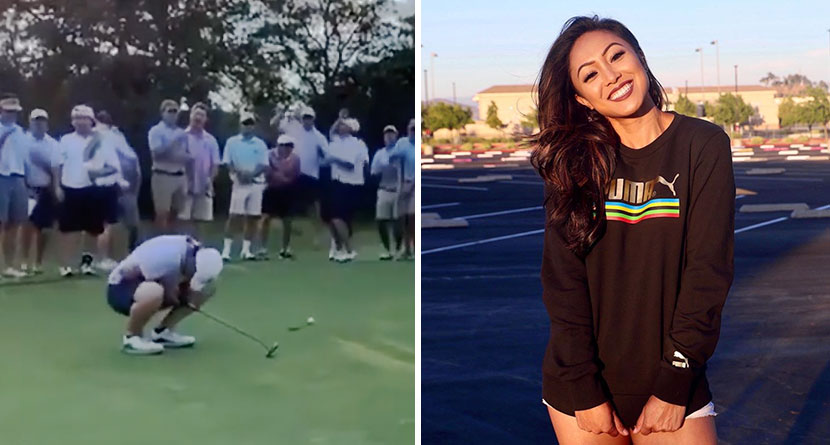 The day was long and arduous for the young man, but finally 5 o’clock came around. The boss arrived and asked, “How many sales did you make today?”

“One,” said the young salesman.

“How did you manage that?” asked the flabbergasted boss.

“Then he said his Volkswagen probably wouldn’t be able to pull it, so I took him to the car department and sold him a new pick-up to haul it in.”

The boss took two steps back and asked in astonishment, “You sold all that to a guy who came in for a bag of tees?”

“No,” answered the salesman. “Actually, he came in to buy a box of tampons for his wife and I said to him, ‘Your weekend’s shot, you may as well go play golf.'”

The Worst Feeling In The World

Tag someone who would miss this $10k putt every time! 🤣 Via: @nickpierce41

Fun day of filming with one of my favorites! Hey @nataliegulbis 👋🏽

Congratulations to @justinthomas34 and @jim_furyk on your big weekends! Justin, well done on winning the WGC-FedEx Invitational for your third @PGATOUR victory of the season. You seem to be getting better with every win. And to my old friend Jim Furyk, congrats on winning the @AllyChallenge on the @PGATOURChampions, and joining a group of guys—one I'm proud to be a part of—to win their first tournament as a senior. I'm sure it's just one of many for you, Jim, and I wish you continued good luck and success! (Thanks for the photos, Jim Mandeville of @nicklauscompanies)