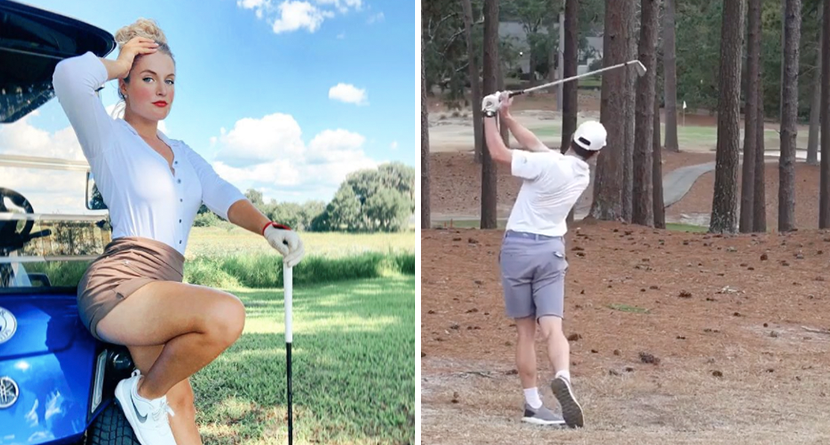 Three golf partners died in a car wreck and went to heaven. Upon arrival, they discover the most beautiful golf course they have ever seen. St. Peter tells them that they are all welcome to play the course, but he cautions them that there is only one rule: “Don’t hit the ducks during your first three months here.”

The men all have blank expressions, and finally one of them asks, “The ducks?”

“Yes,” St. Peter replies. “There are thousands of ducks walking around the course, and if one gets hit, he quacks, then the one next to him quacks and soon they’re all quacking to beat the band. It really breaks the tranquility, and if you hit one of the ducks, you’ll be punished. Otherwise, everything is yours to enjoy.”

Upon entering the course, the men noted that there were indeed large numbers of ducks everywhere. Within fifteen minutes, one of the guys hits a duck. The duck quacks, the one next to it quacks and soon here was a deafening roar of duck quacks.

St. Peter walked up with an extremely homely woman in tow and asks, “Who hit the duck?”

The guy who had done it admitted, “I did.”

St. Peter immediately pulled out a pair of handcuffs and cuffed the man’s right hand to the homely woman’s left hand.

The other two men were very cautious not to hit any ducks, but a couple of weeks later, one of them accidentally did.

The quacks were as deafening as before, and within minutes St. Peter walked up with an even uglier woman. He cuffed the man’s right hand to the homely woman’s left hand.

The third man was extremely careful. Some days he wouldn’t even play for fear of even nudging a duck. After three months, he still hadn’t hit a duck.

St. Peter walked up to the man at the end of the three months, and introduced him to a knock-out, gorgeous woman — the most beautiful woman the man had ever seen. St. Peter smiled at the man and then, without a word, handcuffed him to the beautiful woman and walked off.

The man, knowing that he would be handcuffed to this woman for eternity, let out a contented sigh and said aloud, “I wonder what I did to deserve this?”

The woman responds, “I don’t know about you, but I hit a duck.”