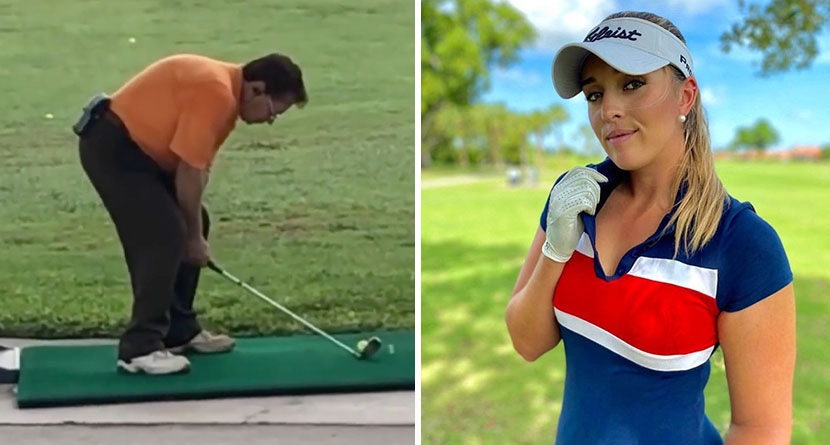 An older golfer was hitting his ball from near a water hazard and his club fell into the water.

When he cried out, the Lord appeared and asked, “Why are you crying?”

The golfer replied that his club had fallen into the water and he needed the club to win the tournament to supplement his meager pension.

The Lord went down into the water and reappeared with a golden club.

“Is this your club?” the Lord asked.

The golfer replied, “No.”

The Lord again went down and came up with a silver club.

“Is this your club?” the Lord asked.  Again, the golfer replied, “No.”

The Lord went down again and came up with an iron club. “Is this your club?” the Lord asked.

The Lord was pleased with the golfer’s honesty and gave him all three clubs to keep, and the golfer went home happy.

Sometime later, the golfer was walking with his wife along the water hazard, and she fell into the river.

When he cried out, the Lord again appeared and asked him, “Why are you crying?”

“Oh Lord, my wife has fallen into the water!”

The Lord went down into the water and came up with a supermodel.

“Is this your wife?” the Lord asked

The Lord was furious. “You lied!  That is an untruth!”

The moral of this story is if a golfer ever tells a lie, it is for a good and honorable reason and only out of consideration for others!

Not Exactly A Confidence Booster

New meaning to the term going low 😂 Via: Zelhof on tik tok

Shoutout to @clubcarcalifornia! I just received my new luxurious lithium powered Onward from @clubcar with a fresh matte gold finish, gator vinyl seats with a Gerald Dab stitched in the middle. This will come in handy when riding around on the land.💯 Go get yours at www.build.clubcar.com. #WeHere #ClubCar #LiveOnward #Sponsored