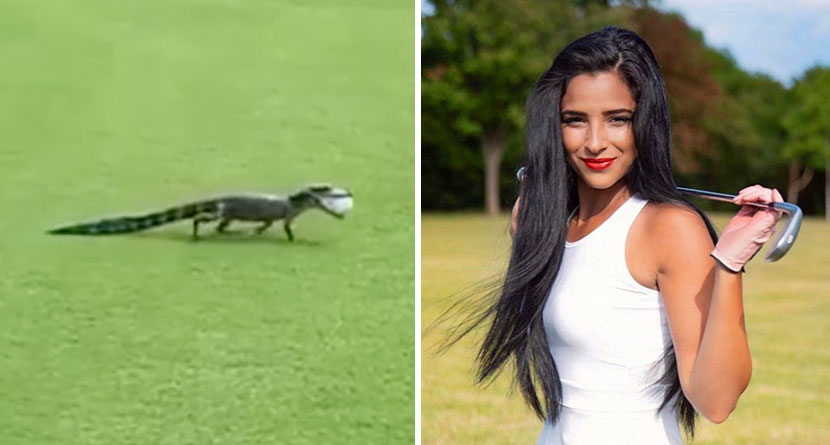 Jesus and Moses were playing golf. On the 5th hole, a shot over water to an island green, Moses hit his 6-iron and it landed perfectly on the green.

Jesus pulled out his 7-iron and began teeing it up when Moses stopped him.

He swung the 7-iron and, sure enough, it landed straight in the drink. He teed up a second ball and grabbed his 7-iron again.

Moses reminded him of his previous attempt and, again Jesus said, “If Tiger Woods can do it, I can do it.”

Plop. Into the water, it went again.

He continued to try to hit the 7-iron over and over until he ran out of golf balls in his bag. At that point, Jesus began to walk out on the water looking down to locate his lost golf balls.

The foursome behind them approached the tee, spotted Jesus out on the lake and said to Moses, “Hey, who does that guy think he is, Jesus Christ?”

Play The Ball As It Moves

Do you play in a bad weather? Imagine, you are playing the best round of your life, but a beautiful day started to get get darker and the wind picks up ☁️…playing in the rain is pretty common and you will have to learn how to adjust your game. For me, between rain and wind I prefer-wind. I hate all this extra staff in my bag, like umbrella, rain suit, extra towels and so on… the rounds gets longer, cause everybody play slower. But no matter what I did practice in the rain ☔️ and I know how to deal with it. What about you? #kjus #kjusgolf

Happy Father’s Day! We love you so much!

Oh hey there weekend ⛳️❤️ Where are you all playing this weekend? . #weekend #tgif #golflife 📸: @conscioustimesproductions