VIDEO: Everyone Knows This Golfer 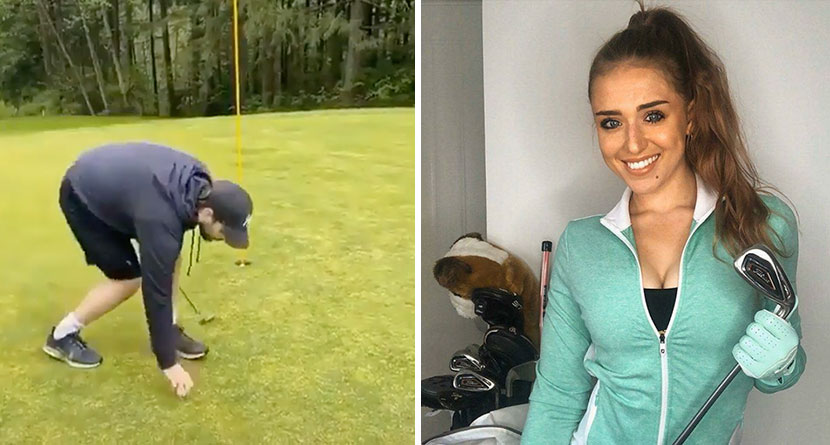 One fine day in Ireland, a guy is out playing golf and he gets up to the 16th hole. He tees up and cranks one. Unfortunately, it goes into the woods on the side of the fairway.

He goes looking for his ball and comes across this little guy with a huge knot on his head, and the golf ball lying right beside him.

“Goodness,” says the golfer, and proceeds to revive the poor little guy.

Upon awaking, the little guy says, “Well, you caught me fair and square. I am a leprechaun. I will grant you three wishes.”

The man says, “I can’t take anything from you, I’m just glad I didn’t hurt you too badly,” and he walks away.

Watching the golfer depart, the leprechaun thinks, “Well, he was a nice enough guy, and he did catch me, so I have to do something for him. I’ll give him the three things that I would want. I’ll give him unlimited money, a great golf game, and a great sex life.”

Aa year goes by and the same golfer is out playing on the same course at the 16th hole. He gets up and hits one into the same woods and goes off looking for his ball.

When he finds the ball he sees the same little guy and asks how he is doing.

The leprechaun says, “I’m fine, and might I ask how your golf game is?”

The golfer says, “It’s great! I shoot under par every time.”

The leprechaun says, “I did that for you. And might I ask how your money is holding out?”

The golfer says, “Well, now that you mention it, every time I put my hand in my pocket, I pull out a hundred dollar bill.”

The leprechaun smiles and says, “I did that for you. And might I ask how your sex life is?”

The golfer looks at him a little shyly and says, “Well, maybe once or twice a week.”

The leprechaun is floored and stammers, “Once or twice a week?!”

The golfer, a little embarrassed, looks at him and says, “Well, that’s not too bad for a Catholic priest in a small parish.”

We All Know This Golfer