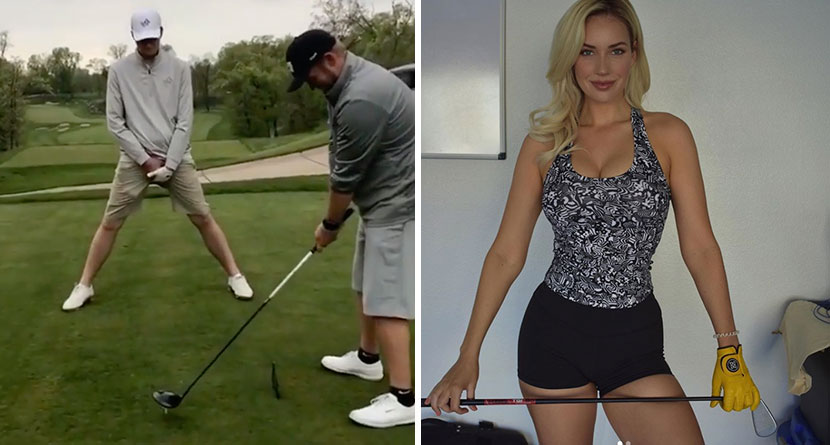 A couple of women were playing golf one sunny Saturday morning. The first of the twosome teed off and watched in horror as her ball headed directly toward a foursome of men playing the next hole.

Indeed, the ball hit one of the men, and he immediately clasped his hands together at his crotch, fell to the ground and proceeded to roll around in evident agony.

The woman rushed down to the man and immediately began to apologize. She explained that she was a physical therapist.

“Please allow me to help. I’m a physical therapist and I know I could relieve your pain if you’d allow me,” she told him earnestly.

“Ummph, oooh, nooo, I’ll be alright…I’ll be fine in a few minutes,” he replied breathlessly as he remained in the fetal position still clasping his hands together at his crotch.

But she persisted, and he finally allowed her to help him.

She gently took his hands away and laid them to the side, she loosened his pants, and she put her hands inside. She began to massage him.

She then asked him, “How does that feel?”

“It feels great,” he replied, “but my thumb still hurts like hell.”

That’s Going To Leave A Mark

Is there anyone you would trust to hit this shot? ? Via: @marcusrogers_official

If you want to win a live virtual lesson with me and new set of clubs then keep on reading! So @18Birdiesapp came out with this really awesome tool to help you work on your golf swing and improve your game! It’s called the AI Coach, and you can use it anywhere, so it’s perfect for practicing at home (like in the garage!) or range or where you have some space to swing! All you need to do is download 18Birdies and use the new AI Coach tool. Analyze your swing using the AI Coach and share your swing video (with the AI Coach graphics) by posting it to Instagram and tagging me and @18birdiesapp and hashtag #PlayBetterGolf. I’ll choose 5 winners to get a 1 on 1 virtual coaching session with me or a lesson plan using your results from the AI Coach where we can chat about golf, life, and I’ll try not to roast your swing too bad! Plus, one lucky winner out of the 5 will win a custom fitting from @ClubChampion! Let’s get you in shape to play your best golf when you get back out on the course. Link in bio to download!