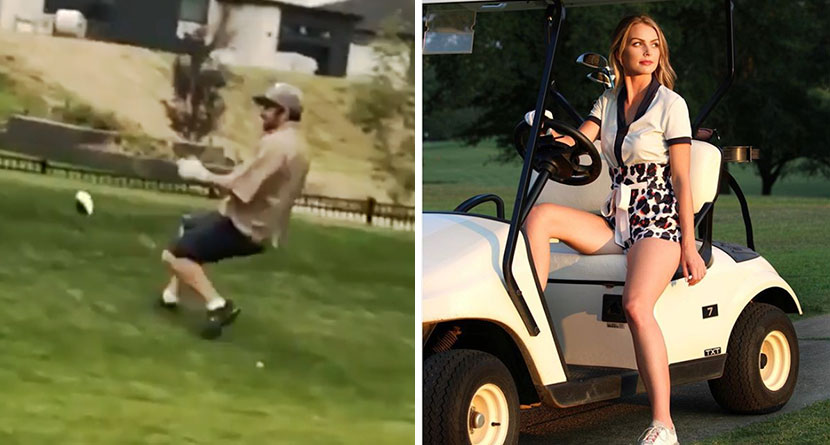 There was a guy so addicted to golf that all he did is go out on the links every single day. He had ambitions of making it to the pros, so he took his game very seriously.

One windy day while playing in the final round of a tournament, the guy was in contention, so he played every shot with utmost care and concentration. After all the scores were submitted, he was declared the winner of the tournament. He went home to his wife with the trophy and some small cash prize.

He kept rehashing his round over dinner. The wife, who is not the least bit interested in golf, got up and went to bed early. The guy followed after a few hours, still high on his golf championship.

When the boys stitch you up with a couple vodka beers! 😂 🎥 – @ryangerwing @barstoolsports

Lesson today 🤓 I’m working on a more compact backswing. The lil practice swing I’ve added in before hitting helps me dial in the changes I’m trying to make! Cute isn’t it x P.s Someone remind me not to have a strength session with @_lwpilates_ before golf 🥴 my legs were quivering 🤣😰🤭 #gainz

🚨🔥🐐• #NEW: Tiger has teed off for a practice round at Winged Foot this morning following some time on the range. He’ll speak to media at 11:30 AM ET and tee times will be out today as well. #TigerWoods 📸: Steve Burkowski / Golf Channel

The golf course will always be my happy place ⛳️ And I always play better when I feel good about my outfit thanks to @swingdish 😎 Use my code HAILEY20 for 20% off all items. Link in bio!