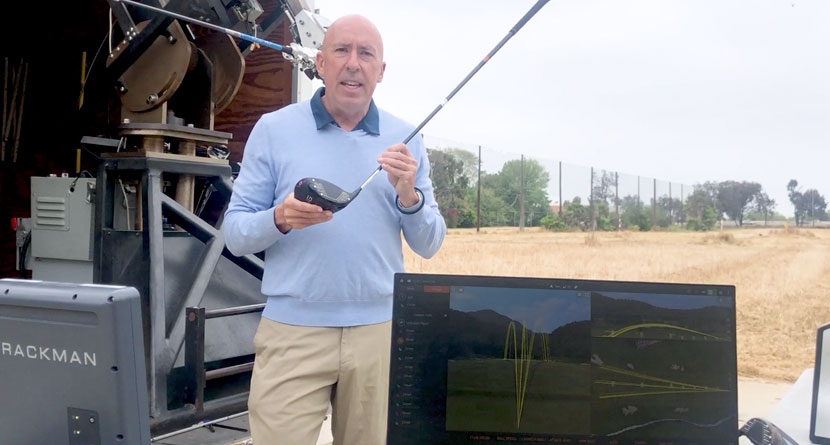 Gene Parente, the founder of Golf Laboratories, the leading independent golf club testing service in the world, has circled the globe by aircraft for decades, but last week he found himself in a situation that he never expected to be in.

Traveling home from Seoul, South Korea where he had been for a made-for-TV golf competition with LPGA Hall of Famer and major champion Se Ri Pak, Parente was awoken from a nap onboard a Korean Air flight by a commotion coming from one of the other members of the business class section.

“I was probably a little groggy so I really wasn’t sure what was going on, but then I saw this guy up ahead of me in business class yelling, maybe not psychotically but he’s clearly upset,” Parente told GolfDigest.com. “And then I see that’s he’s got a plastic bag on his head. I’m thinking, ‘Did I see that right?’

“And I’m having this internal debate about whether I get up, whether I could make this worse, don’t be a cowboy. All those neurotic conversations that anybody who’s been around long enough to remember 9/11 has always had with themselves.  He’s got one hand on the cockpit door yanking on it as hard as he can and his other hand beating on the door, and I think, ‘Uh oh, this is bad.’”

The man screamed – alternating between English and Korean — that he had a bomb and wanted to go to Vancouver, BC, because he had never been there before, according to court documents.

That’s when Parente sprung into action and helped four flight attendants as well as two off-duty pilots attempt to subdue the man.

Gene Parente is known as the man behind the leading independent golf club testing service in the world, but he was called into another type of service on a flight last week. 😳https://t.co/oah6LVE2aB

“Listen, I haven’t been in a fight since I think I was 16 years old, but this guy was like trying to wrestle a titanium bull,” Parente said. “I’m doing all of this while wearing a mask, but I can assure you we were not social distancing. I don’t know if this was going on for 10 seconds or 10 minutes, it was all a blur. I push him against the wall and we’re screaming and punching each other.”

Bizarrely, after finally being subdued by Parente and the other Korean Air staff, the man refused to talk to anyone except Parente.

“We had been fighting each other like five seconds ago, but when we got him he sat down, I could see in his eyes that he was mentally ill,” Parente said. “And then the guy bolted for the cockpit again, and ran through another flight attendant like NFL linebacker hitting a middle school kid. So I run around the other side with the two Korean Air captains and we all jump on him basically in the foothold of a business class seat.

Finally, under control, the man was restrained with zip ties and Parente had to sit on top of him for the remainder of the flight to Seattle, another 40 minutes. Police boarded the plane upon arrival and Parente said he was answering questions for a few hours after that.

“They kept asking me if I was in law enforcement,” Parente recalled. “‘No, I test golf equipment for a living.’ And they’re like, ‘You really should have sat down and let someone else more qualified handle this.’”

The passenger, identified as Gyeong Jei Lee, a Korean native who now lives in Colorado, is facing federal charges of interference with a flight crew and assault on an aircraft.