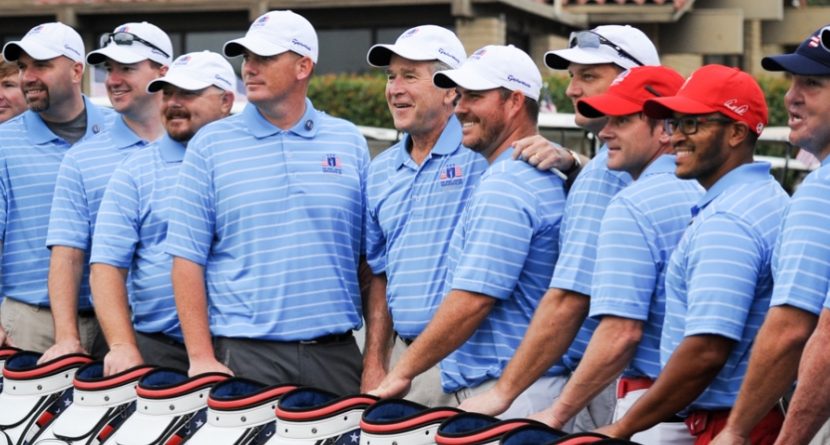 The 43rd President of the United States, George W. Bush, hosted the fourth annual Warrior Open this week at Las Colinas Country Club outside of Dallas, a golf tournament to honor U.S. service members. Or as Bush put it when he spoke to the wounded veterans Thursday, “You can call it the ‘Courageous Open,’ or you can call it ‘There’s No Self-Pity Here Open.'”

Any of those names are fitting for the competitive 36-hole event that features 21 active or retired military members, all of whom were injured while serving the U.S. in Iraq or Afghanistan. It’s part of the George W. Bush Institute’s Military Service Initiative, which aims “to honor the service and sacrifice of post-9/11 veterans and military families by improving their well-being and unleashing their potential.”

And by competitive, they mean competitive. The first three tournaments were won by U.S. Army Cpl. Chad Pfeifer, who was invited to play in the 2014 American Century Championship as a tribute to the U.S. Armed Forces. That’s the annual celebrity golf tournament in Lake Tahoe, and Pfeifer finished fifth, coming in behind Mark Rypien, Jeremy Roenick, Annika Sorenstam and Jack Wagner.

Pfeifer, 32, harbors hopes of making the PGA Tour one day. He’s currently a golf pro in Goodyear, Ariz., teaching others the game he picked up as therapy after losing his left leg when his vehicle was hit with an IED in Iraq.

Yet, Pfeifer couldn’t go four in a row at the Warrior Open. He placed second behind retired U.S. Army Sgt. Maj. Rodney Gorman, who shot a 3-over 145, while Pfeifer finished at +5. The victory earns Gorman a spot in the 2015 American Century Championship, which so enjoyed having Pfeifer around that it now plans to award a spot every year to the winner of the “There’s No Self-Pity Here Open.”