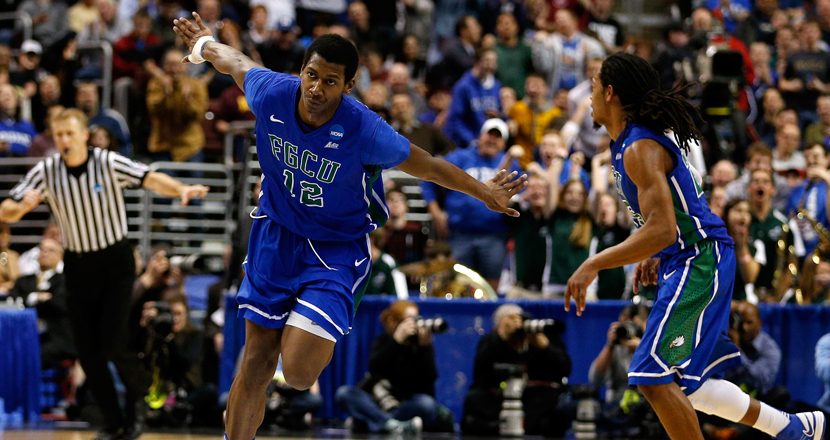 Who cares about your bracket? We should all be rooting for the Eagles. Not only have they beaten “power conference” teams in Georgetown and San Diego State, but they’ve done it with smiles on their faces and a celebratory chicken dance afterward.

Led by their rich happy-go-lucky coach, Andy Enfield, the FGCU Eagles have already made NCAA Tournament history by becoming the only 15 seed to ever reach the Sweet 16. But, who the hell are these guys? Where did they come from?

FGCU is a rare story — even as the ultimate Cinderella. Located in beautiful Fort Myers, Fla., the school was established just 22 years ago in 1991. It didn’t admit a single student until 1997. FGCU just became eligible for the NCAA Tournament last year after making the leap to Division I from Division II.

What the school lacks in age, or seasoning, if you will, it make up for it with amenities. If you went to college after 1997, you made a terrible decision not going to FGCU. Dorms have beach views! The beach! What did your college dorm have a view of? A boiler room?

Not only is the campus beautiful, but Fort Myers is a hotbed for some of the country’s best golf. If you weren’t already upset about not spending four years at this place, take a look at some of the courses in the surrounding area:

The Plantation Golf & Country Club: Located just five miles from FGCU, the Plantation is the most exquisite club in the area. With a championship course that measures over 7,300 yards and a ridiculous clubhouse, this private club is a true golfer’s paradise.

Fiddlesticks CC Long Mean Course: This place has the perfect name. As if Fiddlesticks wasn’t good enough, the “Long Mean Course” is magical. Granted, the other course at FCC is the “Wee Friendly,” which is also awesome. The Long Mean measures over 7,000 yards and boasts a slope of 140 so, it clearly lives up to its name.

The Forest Country Club (Bear Course): Another gem located just minutes from Fort Myers, the Bear Course is just what it sounds like: 7,000 yards of hilly terrain and water hazards, this track is not for the faint of heart.

Coach Andy Enfield made millions of dollars when he sold a software technology company in the early 2000s. Not to say he’s a bad looking guy but Mrs. Enfield is garnering almost as much attention as he is due to her supermodel past.

Regardless of who your favorite team is, the Florida Gulf Coast Eagles are perhaps the most likable team in NCAA Tournament history. They play with swagger from start to finish. It seems like every time down the floor ends in a highlight reel finish. Almost everyone will be pulling for them to cut down the nets in Atlanta.