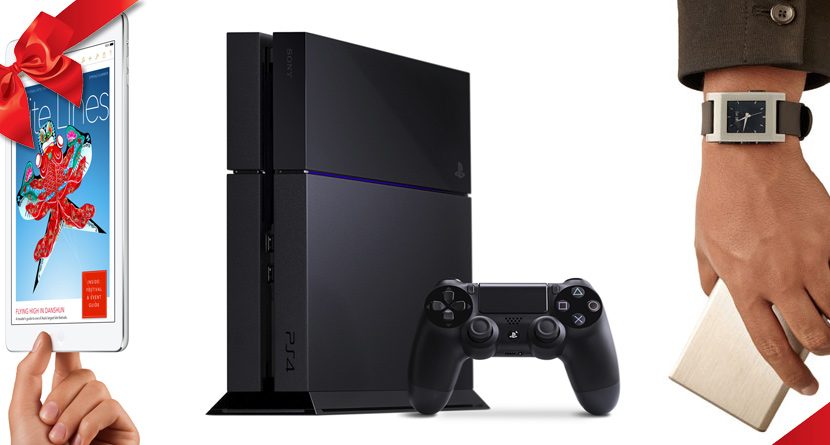 Sweaters are nice; we all need a few. Books are cool, too; we should always yearn to learn. But when it comes to gifts, some are just way cooler than others. And more often than not, the best ones tend to be electronic.

Here are nine such awesome gifts:

Seven years after its third version, Sony’s latest and greatest PlayStation is available just in time for the holidays. New features include downloading games from your PC and sending them to your console; sharing screenshots or livestreams via social media; an upgraded DualShock controller; and apps like Netflix and NBA Game Time.

If PlayStation isn’t your thing, the Xbox One won’t disappoint. It’s being touted as the “all-in-one entertainment system” and appears to be just that. You get the console and a Kinect sensor, and the system is voice-activated. Switch from video games to live TV instantly, or watch real golf and play video golf at the same time. Watch movies and Skype with friends at the same time. Or surf the web. Or play music. Regardless, leaving the house will become a real chore.

Tons and tons of companies produce portable speakers and claim their sound is the best. Unless it’s Bose doing the bragging, they’re all wrong. This SoundDock can serve as your home’s primary music system – it runs off your docked iPhone or iPod, or can stream music via Bluetooth from an app or stored music.

You think Augusta National is green on your current TV? This one is four times clearer than HD, boasting more than eight million pixels. Surround sound comes from a 65-watt front-facing speaker system. And you can control it all with your smartphone or tablet.

If you thought your iPad was already light, it just got lighter. The new iPad Air weighs only one pound and is thinner than previous versions, but still boasts the same retina display. Upgraded processor chips make this tablet nearly twice as fast as its predecessor, and better efficiency means the battery can still last 10 hours.

For those agonizing instances when it’s too tough to reach into your pocket and grab your smartphone, you can now just look at your smartwatch. Pebble set the standard for these synched-up wristwatches and remains the best on the market. Synch your phone to your watch so you can see who’s calling/texting/emailing without touching your phone, play music, track your running pace, and choose from hundreds of watch faces, like this one.

Many people sit in front a computer all day. Many of them are so crazy busy that they work while they eat. Sesame seeds from hamburger buns are tough to remove from in between computer keys, and too much coffee can make you so jittery that you spill that sixth cup of the day. For those people, give them a washable keyboard. It just makes too much sense.

If you know one someone who downs coffee like every day is Monday morning, get them the aforementioned washable keyboard, then support their habit by also gifting them this single-serve brewing machine. Instead of dropping another $5 at the nearest Starbucks or drinking 10-hour old decaf, they could enjoy some fresh French Roast coffee. Touch a button and in less than 60 seconds you have rejavanation.

Got a friend who loves hosting parties? And loves making drinks? And by making drinks, we mean making up drinks? They need the Smart Bartending app and the scale that goes with it. Tell the app what cocktail you’d like, then watch your friend follow its directions. No measuring needed; the scale tells the bartender when to stop pouring. The app can also suggest drinks based on whatever you tell it you have available.