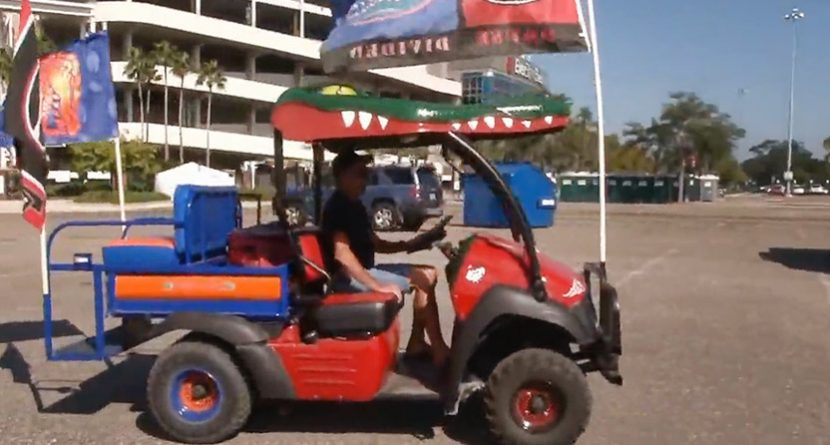 The Universities of Florida and Georgia have been battling on the gridiron for nearly 100 years. Since 1933, the football teams have played annually at a neutral site in Jacksonville (except for two years when the city’s stadium was under construction). And the rivalry game, the latest of which was played this past Saturday, has grown into so much of a spectacle that its pre-game festivities are now commonly referred to as the World’s Largest Outdoor Cocktail Party, which might actually overshadow the game itself.

So big is Florida-Georgia week that a gigantic parking lot strictly for motorhomes is opened on Wednesday, a full three days before the game on Saturday. It’s aptly named RV City.

So big is RV City that partygoers on one side of the lot feel so detached from those on the other side that they think they’re missing out on something. It would take hours to peruse the grounds by foot to see what all is going on.

The solution: golf carts, of course.

Many fans that arrive in Jacksonville driving their RVs also come with a golf cart in tow. And as sports fans are known to do, some get really into sprucing up their carts:

By the way, Florida won the football game this year, knocking off 11th-ranked Georgia, 38-20.