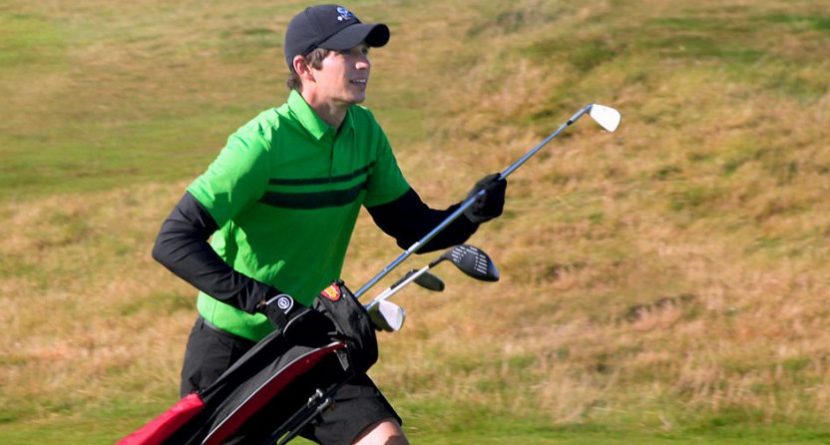 Golfers get knocked all the time for their sport not really being a “sport.” When you see the physiques of Tiger Woods and Adam Scott and Rory McIlroy, you can argue the pros have turned it into an athletic event. But is it so for those who aren’t making millions?

Absolutely if you’re among the 55 speed golfers set to compete in the 2013 Speedgolf World Championship taking place Oct. 26-27 at Bandon Dunes Golf Resort in Bandon, Ore. That’s where the world’s best golfers who have no issues whatsoever with pace of play will convene.

What is speed golf? Exactly what you’re envisioning: playing golf as fast as possible. Players tee off, grab their bag, run to the ball, hit again, run to the ball, eventually knock it in the cup, and then run to the next hole. Scores are tabulated by adding the number of strokes to the minutes and seconds it takes to finish 18 holes. So if a golfer shoots a 75 in 55 minutes and 15 seconds, their score for the round is 130.15.

Eighteen holes in under an hour?! And a score under 80?!

Walker, who captained the Notre Dame golf team while he was in college, is a golfer first and runner second. But he’ll go up against some elite runners, such as Nick Willis, a New Zealander who won the 2008 Olympic silver medal in the 1,500 meters. His golf handicap is 9, so Willis will quite literally give Walker a run for his money.

Of course, this isn’t your typical round of golf. Players usually take only five or six clubs with them in their small bag, and wear running shoes with whatever golf attire they choose. Flagsticks are left in the holes while putting, and if a ball is lost, players can take a drop anywhere along the previous shot’s line of flight for a one-stroke penalty. However, they are expected to rake bunkers and fix ball marks.

Regardless, speed golf goes against all ideas of a relaxing round of golf. It’s fun to watch, though.

Other Hot Links:
– The Golfing Dead in Honor of “The Walking Dead”
– 7 Golfers With Famous Neighbors
– Does It Drive: Busch Whacked