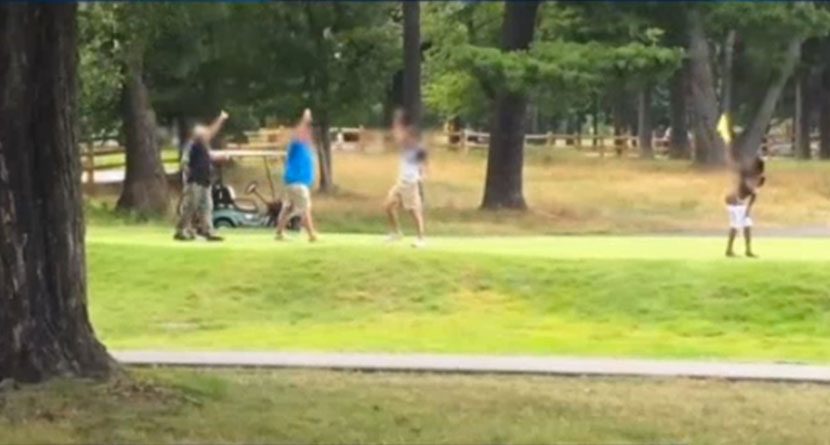 Things got steamy on a late July day at Preakness Valley Golf Course in Wayne, N.J. and not because of the humidity.

Sunrise Gentlemen’s Club of Paterson held their annual golf outing “for charity” and it was exactly what you’d expect. Naturally, exotic dancers were present.

While we’d never condone that sort of behavior, the bigger issue was that it took place on a county-owned public golf course with holes visible from a main road.

Also, it doesn’t help your case when an undercover news team filmed the entire thing. NBC News 4 and their I-Team have the full report:

The event in late July, sponsored by the Sunrise Gentlemen’s Club of Paterson, New Jersey, advertised a day of golf and girls for $195 per person. Police officers and firefighters were offered a discount.

Sunrise is familiar to authorities in Passaic County since it was closed temporarily last year after a prostitution bust.

The outing was billed as a charity golf outing with donations going to a range of causes, including the Dallas Police Department and unspecified support for those recovering from the Pulse nightclub shooting in Orlando.

Once the outing got underway and drinks were flowing, I-Team cameras captured lewd behavior including lap dances and groping in public view. Neighbors of the taxpayer-supported course who watched the video were horrified.

“It’s absolutely disgusting,” said one woman who requested her name not be used. “I’ve lived here 57 years and I’ve never seen anything like that. It’s unbelievable.”

The whole story reeks of class. Especially when the gentleman in the interview justifies the event comparing a suburban New Jersey county park to New Orleans, where open-container laws don’t exist.

Hope all that money actually went to charity, even if it was all in singles.