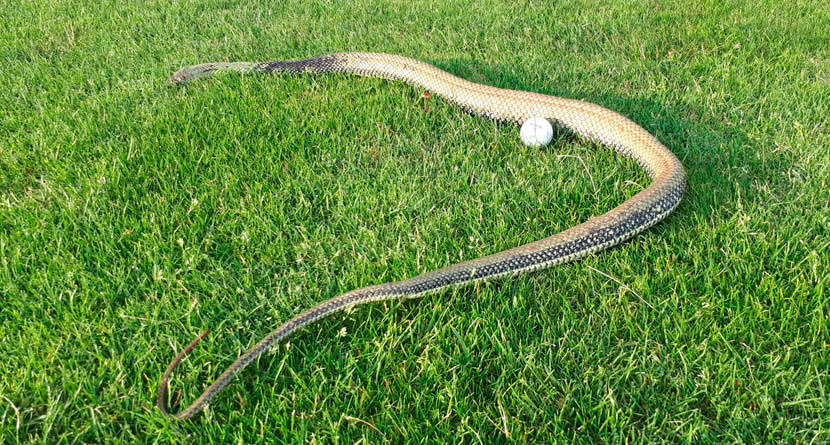 Tragedy struck at a golf course in South Dakota’s Black Hills on Monday. A 70-year-old golfer died after being bitten by a rattlesnake while looking for his ball in some high grass.

The man was bitten on the ankle by the snake, rushed back to the clubhouse via golf cart and administered CPR. Once emergency crews arrived at the scene, the man, identified as Lawrence Walters of Geneseo, Illinois, was taken to Spearfish Hospital where he was pronounced dead.

The course’s golf pro, Mike Mendelson, says the man was looking for a ball in tall grass when he was bitten on the ankle.https://t.co/8S6OdykDhi

“We do have areas marked with snakes on the golf course,” Mike Mendelson, the golf pro at Elkhorn Ridge Golf club said, according to The Black Hills Pioneer. “Unfortunately he was in an area that did have some snakes and was bitten.”

While there are signs on the course, Mendelson said that he plans to have more signs posted and treat tall grass as a lateral hazard to avoid another incident.

“We were actually kind of shocked to hear that he didn’t make it,” Mendelson said.

“Generally, if you get bit on the hand, for example, your arm will swell up, and you’ll be in intensive care unit for two or three days. I’m sure it hurts and it is potentially life-threatening, and you do have to be watched carefully, but most of the human bites that I’m familiar with that’s about it.

“One of the things that can happen with those bites. If the snake just gets lucky and the guy unlucky and the fang pierces the vein, that venom pulses through that body literally in one or two heartbeats. Another thing is you can have an anaphylactic reaction to it like you would with any sort of venomous animal. The venom plays its part, but a lot of it is just the fact that the person might have just been allergic to rattlesnake venom and would not have had that kind of reaction if he had not been allergic because anaphylactic shock can kill you.”