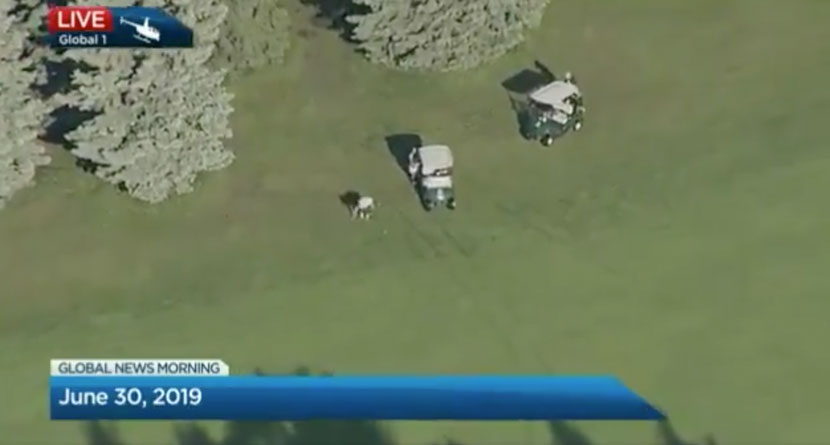 Golf is a game of rules and decorum, so there’s a bit of karmic energy associated with what befell a club golfer at a Canadian golf course a few weeks ago.

Filling some airtime, anchor Kent Morrison tried his hand at calling some golf, but had no idea what he was in for when a golfer caught on camera reached their drive. The golfer picked up the ball and moved it to a better spot closer to the fairway.

As the golf gods tend to do, they punished the illegal move as the golfer duffed it back towards the trees, only to run up and retrieve the ball and hit again.

NOT cool to put me on TV without my permission pic.twitter.com/HejuSnqjcg

“We’re going to convene and figure out the yardage,” Morrison commentated. “Pick that ball up, put it right there, much better spot.”

Amid laughter and additional commentary, the Global 1 news desk got a kick out of the hacker utilizing the mulligan.

As if the clip could get any better, Morrison threw it to their reporter in the air, Shane Blakely, who actually knew the golfer on the ground who was caught by the helicopter’s camera.

“I got a text from a good friend of mine that said, ‘hey, you flying over ‘Toria right now?'” Blakely explained. “I said, ‘yea, did you just duff it, take a mulligan?’

Morrison confirmed to Golf.com’s Sean Zak that the morning golf views are a typical part of the Global 1 morning show, but never have they caught a golfer in the act of cheating before.

8 am. All summer. Our guy shows golfers from the helicopter. This was a hall of fame morning. glad you liked it.

“8 a.m. All summer,” Morrison tweeted. “Our guy shows golfers from the helicopter. This was a hall of fame morning.”

Let this be a lesson and a warning to all the rule breakers; you never know who or what is watching you and your footwedge.