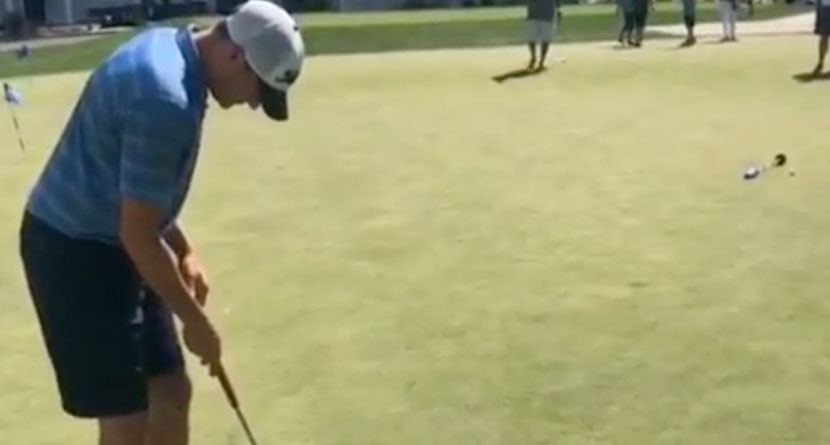 The dog days of summer are officially golf outing season in the Northeastern United States, and with these charity events often come stories of ordinary golfers doing extraordinary things.

The latest in a line of awesome outing stories comes from Oradell, New Jersey where 29-year-old Anthony Carnevale advanced through three stages of qualifying to sink a 35-foot putt for $10,000.

Playing in the 17th Annual Nose Tackle Classic, a golf outing held on August 12th at the Glen Ridge Country Club in New Jersey with proceeds benefitting the Anthony P. Marotti Memorial Scholarship Foundation, Carnevale advanced in a putt-off that required he make a 10-foot putt, a 15-foot putt and come closest to the hole out of the qualifiers on a 30-foot putt.

Carnevale sank the first two and then beat six other competitors to earn his shot at the pot.

“I’m just like, don’t embarrass yourself,” Carnevale told GolfDigest.com. “People are starting to gather around. I kind of look at a spot and I just hoped that it would get there. I hit it at the spot and right away I liked what I was looking at.”

A friend recorded the whole thing as Carnevale drained the right-to-left putt. The ensuing celebration was what you’d expect.

Carnevale turned the $10 he spent to enter the contest into a 1,000-times payout. It was the first time in the 17-year history of the event that anyone had made the big-money putt.

“I’m close with the guy who ran the outing, so I’m not worried about not getting the money,” Carnevale said. “I told him, like Happy Gilmore, if you guys have the big check, I’ll take the big check.”

What’s he going to do with the cash? First, he’s going to pay off his student loans, then like any self-respecting golfer, he’s going to buy new clubs and play some more golf. He’ll probably want to hang on to that Scotty Cameron putter, however.