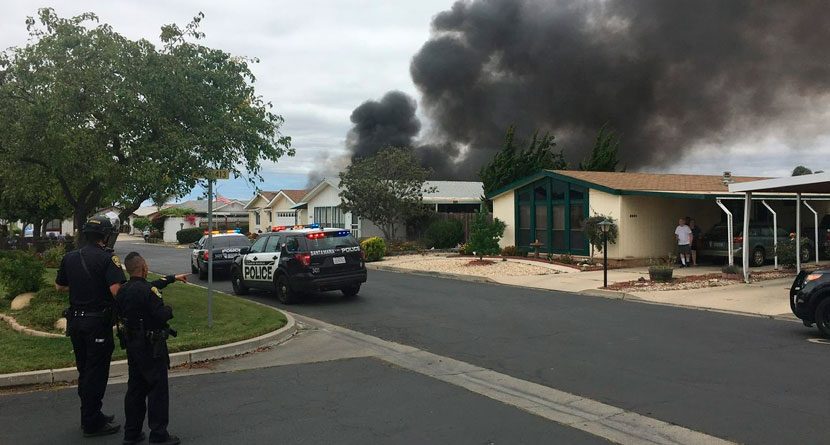 A chaotic and tragic series of events led to the death of five people in Casa Grande, California on Friday after a golf course argument turned into a double homicide.

According to KEYT.com, police say an unidentified suspect got into an altercation with two golfers the Casa Grande Senior Mobile Estates golf course. The suspect retrieved a firearm from his nearby home, returned to the clubhouse and fatally shot 70-year-old Kurt Bracke and 78-year-old Richard Hanen.

After that, the suspect fled the scene of the crime. Nearly as soon as police responded to the shooting, an explosion occurred at a home at 407 West Taylor Street.


“Within moments as we were starting to move in that direction, there were reports of an explosion and fire at 407,” Santa Maria Police Chief Phil Hansen said. “The fire engulfed the entire unit almost immediately and it was a very rapidly moving fire.”

With an active shooter situation as well as a fire taking place within the same neighborhood, first responders had to proceed with extreme caution as multiple facets of the Santa Maria PD were dispatched to the scene.

Adding more chaos to the scene was the contents of the burning home continuing to explode.

“All throughout the firefighting challenge, ammunition was cooking off inside 407, so that created a safety hazard for residents, for responding officers and firefighters,” Hansen said.

While the search for the at-large shooter continued on the ground and through the air, police came to believe that the shooter was inside the home that exploded, along with two others.

The Santa Maria Police Department now says 5 people were killed Friday afternoon at a Santa Maria mobile home park and golf course. They have released the names of two of the victims. https://t.co/pH61BMCVWo

“Initial reports are that we have one, perhaps two victims deceased inside unit 407, so a high likelihood that our suspect is among those that were in 407,” said Hansen. “What weapons were possessed, what was utilized, what the nature of the grievance was or whatever caused this horrific thing to take place, that’s going to take some time.”

Police later updated that the shooter, along with two others’ remains were found in the burned-down 407 property.