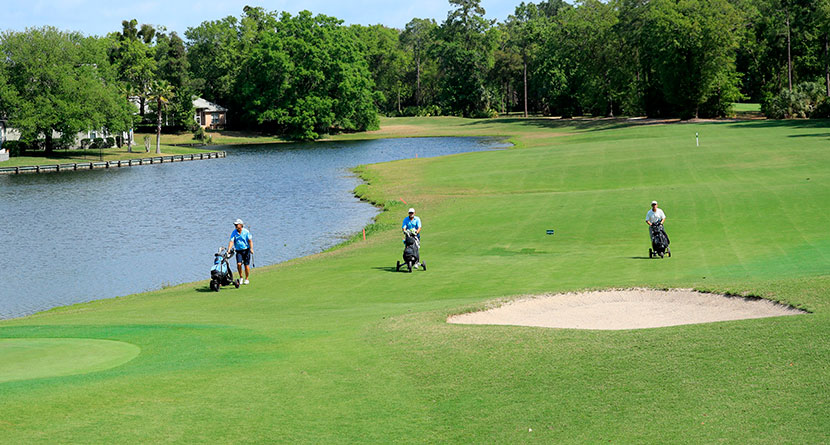 The battle between what is right and what is safe continues to rage on at golf courses around the country, particularly those who find themselves in the jurisdictions of state or local governments that have deemed golf as a non-essential or unsafe hobby during the coronavirus pandemic.

In recent days and weeks, even as golf courses around the country prepare to reopen legally under lifted stay-at-home and shelter-in-place guidelines, golfers have taken to closed courses in Connecticut, Florida, Massachusetts and Pennsylvania only to be reprimanded by local law enforcement and other concerned citizens.


“People have called to let us know that they’ve seen players on the course,” Michelle LaDouceur, Boca Delray Golf and Country Club’s property manager, said. “We don’t have 24-hour staff here, and no security cameras, either. So if people are out there playing, we have no way of knowing about it and no way of policing it.”

A few miles down the road, Ira Lipshutz, 74, was chipping balls with a friend at the Westchester Country Club in Boynton Beach.

“My wife’s not thrilled that I’m out here,” Lipshutz said. “She’s much more cautious than I am.”

It’s a refrain that can be heard around the nation as spring weather rolls into town.

The natural social distancing that a round of golf allows for was bucked in post-round gatherings in a parking lot at Hop Brook Golf Course in Naugatuck, Connecticut, which was filmed by a concerned citizen and precipitated the closing of the courses since proper measures were not being taken.

According to GolfAdvisor.com, private clubs in Pennsylvania and Massachusetts have seen police shooing folks off golf courses, but golfers play on where enforcement hasn’t taken place.

Steve Skinner, the chief executive of KemperSports, which manages 130 golf courses, echoed a familiar battle cry from golfers to The New York Times.

“It’s a game that is played in what is essentially a 200-acre park, with a maximum of 70 people in the park at a time,” said Steve Skinner, the chief executive of KemperSports, which manages 130 golf courses. “That’s more than two acres per person.”

Ironically, as more golf courses prepare to open — the NGF reports 55% of courses in America are currently open with that number expected to jump to 77% by mid-May — Mr. Lipshutz of Florida plans to head back indoors when things open up.

“There will be a lot of players here,” he said, “And, unfortunately, not everyone is as careful as I am.”