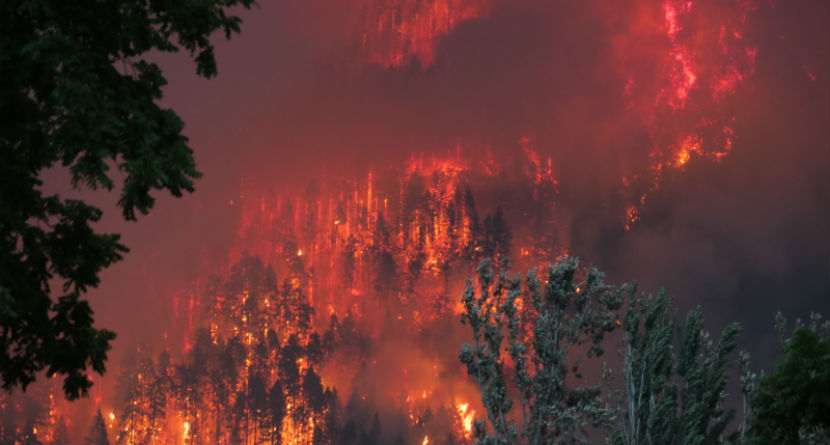 There’s nothing like playing a little golf with a natural disaster looming in the background. Between the news of Hurricane Harvey and Irma in recent weeks on the east coast, wild fires are burning on the west coast causing widespread damage. While the hope is that these blazes will be extinguished soon, it hasn’t stopped folks from getting in some swings.

Earlier this week, some jaw-dropping photos surfaced of golfers playing at Beacon Rock Golf Course located in North Bonneville, Washington with the Eagle Creek fire, a 32,000-acre blaze near Oregon’s Columbia River Gorge burning behind them.

Fortune has the story behind where the remarkable pictures came from.

For days, a photo of three golfers putting near what appears to be the setting of Dante’s Inferno in Oregon has been making its rounds on the Internet, with commenters doubting its too-crazy-to-be-real imagery and claiming the picture had been altered. Not so, says amateur photographer and Columbia River Gorge aficionado, Kristi McCluer. And she would know—she snapped the photo of the blazing Oregon fire. “I saw it while skydiving,” says the airborne adrenaline junkie. McClure made five jumps that day, and on the third dive she saw a huge, vertical smoke plume rising to the east. By the time she made her next jump an hour later, the smoke had gone horizontal. “You could see it spreading across the sky,” she says.

McCluer ended up in the parking lot of the Beacon Golf Course in North Bonneville, Wash., where a few golfers were still on the course. “And I got out and I started taking pictures,” McCluer says.

“The golfers and I were not actually in any danger,” says McCluer. “When I was done taking pictures, I walked over to them and we talked about how crazy and surreal and horrifying this event is, but I didn’t get their names or have any real interaction with them. It was just a few words exchanged.”

‘I Saw It While Skydiving’: The Story Behind the Viral Eagle Creek Fire Golf Photo https://t.co/kvfZqm2Tmo pic.twitter.com/EQrzV9zIBG As you can see, the golf course is 10 miles away from the Eagle Creek Fire, separated by the Columbia River. Here is the latest map of the Eagle Creek Fire, which has grown to 32,000 acres: https://t.co/AcYD6sMyc9 pic.twitter.com/xAp6KgxY1j