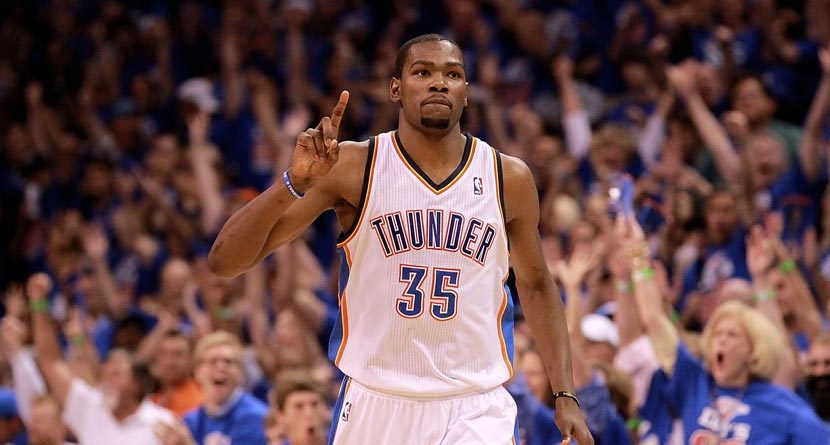 Kevin Durant took home his first MVP title on Tuesday after finishing second to LeBron James three of the past four seasons, unseating the king from his throne. After finally claiming the elusive accolade, an emotional Durant gave a heartfelt acceptance speech, thanking his teammates, and of course, his mother. It was truly one of the greatest acceptance speeches you’ll ever see:

Players across the PGA Tour took notice of Durant’s incredible speech, tweeting out support and congratulatory words for the MVP.

“One of the best speeches I have seen #KevinDurant He is so grounded and humble #MVP http://t.co/qYxsXehiTc”

I can’t wait to see KD’s Hall of Fame speech.

you have to watch @KDTrey5 MVP speech.brilliant

One player in particular caught our attention when he congratulated Durant on winning the MVP: Jordan Spieth.

The two have taken similar career paths, which could hint at what’s to come for the young golf phenom. Both Durant and Spieth played at the University of Texas, each staying for only one year. Spieth took home Rookie of the Year honors in 2013, while Durant won it for the 2007-08 season. While Durant has had his fair share of game-winning and game-tying shots, Spieth has one of his own as well. At the 2013 John Deere Classic, Spieth holed his bunker shot on the 18th hole to tie for the lead and force a playoff.

Does this make Spieth the “Kevin Durant of golf?” We’ll just have to wait and see.

Although Durant doesn’t appear to be an avid golfer, he has at least attempted to take up the game. He shared this video of himself taking a few swings on a tee box:

So his swing isn’t the best we’ve seen, but most golfers aren’t 6-foot-9 and can’t hit a jump shot from beyond the arc like Durant. That doesn’t mean he doesn’t pay attention to what these guys do on the course, though. He posted a photo on Instagram last month of Jason Dufner lining up a putt while wearing Durant’s signature shoes, with the caption “Let’s go Duf.”

This wasn’t the first time Dufner has rocked Durant’s shoes on the course. He tweeted a photo of himself wearing KD VIs at the Masters, calling them the “flyest shoes out.” I smell a little Durant-Dufner bromance going on here.