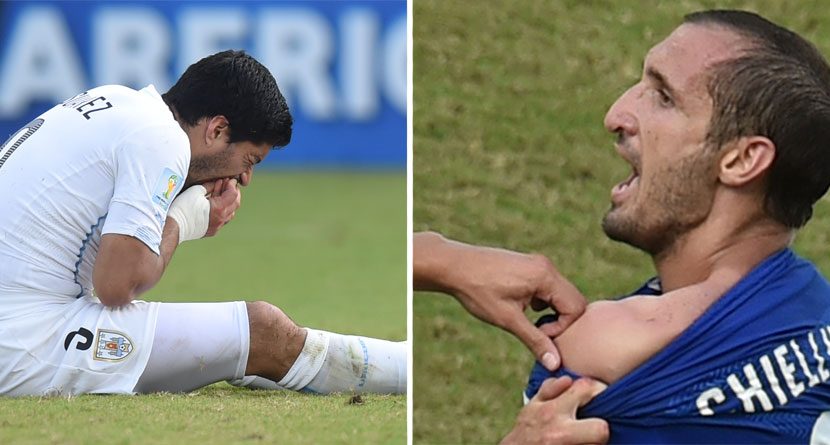 With the group stage of the FIFA World Cup finishing up, emotions between countries are running high. Maybe a little too high. During the final match of Group D between Uruguay and Italy, one player got a little too hungry for victory … quite literally.

Uruguay’s star striker, Luis Suarez, took a bite out of Italy’s Giorgio Chiellini. And it’s not the first time Suarez has used his teeth in a match. Suarez has been suspended twice in the past for biting opposing players, a reputation you definitely don’t want to have.

Here’s evidence of the alleged bite:

As horrible as the play was, Suarez’s bonehead action gave us some great reactions from golfers on Twitter. Ian Poulter led the way, of course.

How disappointing. But have to laugh at people posting so funny stuff. @Hot_Tubby: Or this one @IanJamesPoulter pic.twitter.com/jcgzscElXB”

“I thought he was a tree” says Suarez pic.twitter.com/rGgCtzdCev

And yet there were more…

Feed him @AlaineMiranda @IanJamesPoulter @Deadspin Luis Suárez’s career, in one Vine: http://t.co/uwCDl72M4M” “another one bites the dust!

Oh not again! Biting is so childish & unacceptable.

Anyone fancy a nibble…. Hahaha he’s only done it again. Hannibal #suarez Munch Munch. Sounded like some drama in that game.

Uruguay would go on to win the game, advancing to the knockout round and eliminating Italy from the World Cup. Suarez also went unpunished for his actions.