Golfers Save Friend From Crocodile Attack 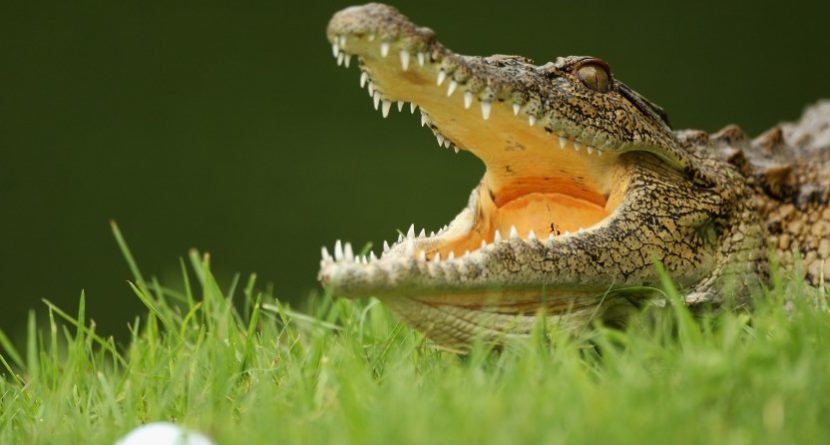 Mexico isn’t exactly the safest place in the world, but that’s largely because of crime surrounding drug wars. You’d think you’d be fine on a golf course.

But Dougie Thomson of Scotland wasn’t so lucky as he hit out of a bunker at the Iberostar Cancun Golf Club. After the 58-year-old watched his shot land on the green, he turned to see a 12-foot crocodile latch on to his thigh.

“My ball was in the bunker around 10 to 15 feet from thick shrubbery. I didn’t even know there was water behind the bushes,” Thomson told The Mirror. “I took a shot and it landed on the green. Then I heard this noise behind me and this huge crocodile snapped me by the thigh.”

Thankfully, one of his playing partners rushed over and began walloping the reptile with his golf club. That didn’t seem to faze the croc much, but it finally relented when the two other friends drove over it with their golf cart.

“One of them (in the cart) started hitting the crocodile as well while the other actually drove the cart over it. It opened its mouth a bit. My friends pulled me back but it snapped again and grabbed my hip a bit higher up. Then it just stopped suddenly.

“When they eventually pulled me away, it started attacking the golf cart. My friends were more shocked than I was as they had to see the attack. I was in the eye of the storm,” Thomson said.

Thomson is in stable condition at a local hospital, and will soon get to fly home to Toronto, where he now resides. He and his friends were in town for a wedding. Originally, only two of them were going to hit up the links, but thankfully for Thomson, they gathered a foursome that ended up saving his life.

Crocs have been known to make their presence felt at PGA Tour events too: