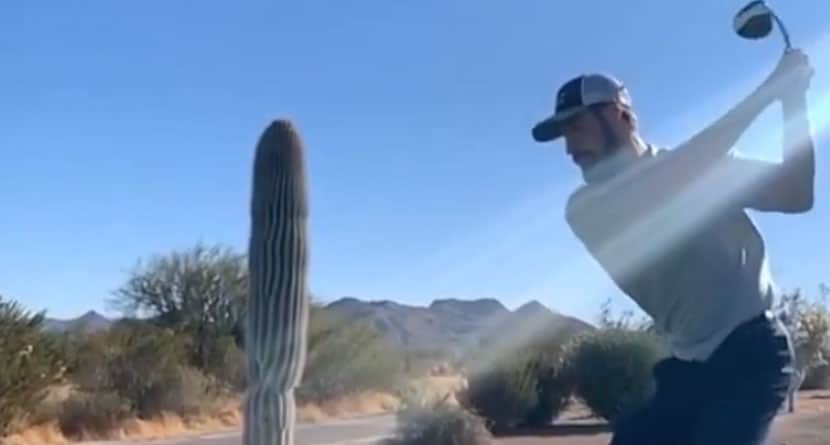 Playing golf in and around the Arizona desert presents a number of issues, not the least of which is avoiding hitting your ball into said desert.

However, aiming your ball into the desert, in general, and at a protected plant specifically can result in local authorities scouring social media in hopes of finding you and charging you with a class four felony.

That’s what a group of golfers face after a video surfaced on the popular golf Instragram page Golfers Doing Things last week.

The video shows a golfer teeing up a driver and hitting a saguaro cactus from close range with a driver. After striking the cactus, the golfer is greeted with congratulations and fists bumps, with one member of the foursome saying, “Hey dude, I think we just made that ‘Golfers Doing Things’ page.”

The incident took place at the We-Ko-Pa Golf Club in Fort McDowell, 23 miles northeast of Phoenix.

Saguaros, which are found exclusively in the Sonoran Desert in the southwest United States, are a protected plant under the Native Plant Protection Act. Under Arizona state law, the destruction or theft of a saguaro cactus is illegal and can result in a class four felony charge, according to the National Park Service, according to a report by Audrey Jensen of The Arizona Republic.

Contacted by the reporter, Josh Minsky, an assistant pro at We-Ko-Pa, confirmed that the video was taken at the course and this wasn’t the first time it’s happened.

“People think it’s fun,” he said. “There’s a couple of cacti that are closer to tee boxes out on our course that just have holes all over them.”

The post, which went out to the accounts more-than-800,000 followers, was roundly condemned by the commenters.

Minsky said people hitting cacti with their ball accidentally happens frequently, but players such as those in the video in question are told not to purposely do it.

“Accidents do happen, and that’s part of the nature of being there, but when it doesn’t have to be down the firing line, it’d be kind of nice not to take advantage of it like that,” Minsky said.

The course said they are working with authorities to track down who the person in the video is, but only have a name based upon the accounts credited for posting it to social media.