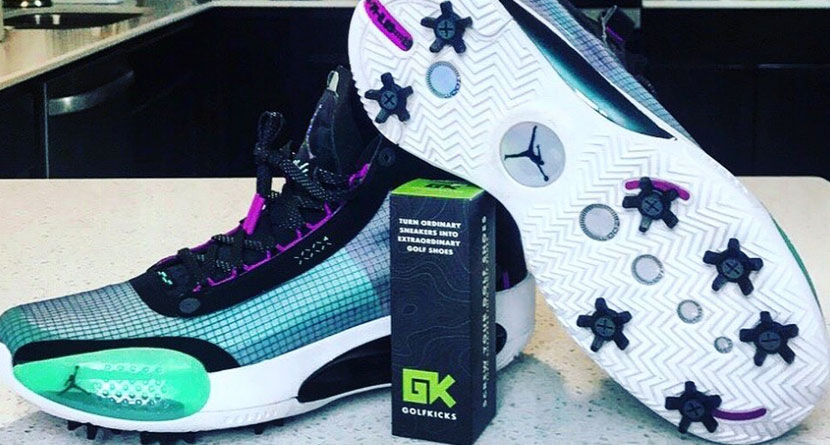 Fans of the popular ABC show “Shark Tank” will know that it’s usually the most simplistic and actionable inventions that gain the most traction among the panel of billionaire investors.

While innovation and technology are alive and well within the golf industry, we’re used to seeing golf club manufacturers unlock different kinds of modernizations as it pertains to equipment gains, but a Denver-based company has taken a novel idea when it comes to making the shoes you love and turning them into golf shoes that you love.

Coming into the tank on a golf cart, co-founders Tyler Stuart and John Krosky entered the tank asking for $300,000 for an 8% stake of their company Golfkicks, a do-it-yourself company that allows golfers to turn any flat, rubber-soled shoe into a golf shoe by adding soft spikes to them. After demonstrating their product and handing out samples, the two entrepreneurs went through the gauntlet ranging from questions about their company as a whole to their valuation of a nearly $4 million.

Initial sales of $120,000, a successful Kickstarter campaign and selling out of their first run of inventory was enough to quell those responses, but they still needed the right partner.

It came down to Dallas Mavericks owner Mark Cuban and “The Queen of QVC” Lori Grenier. Grenier wanted to make a loan deal and collect a royalty based on not having their final product ready to sell and ship yet, but Cuban saw a bigger opportunity.

Cuban and the co-founders settled on a deal of $300,000 for 13% of the company with the vision to be expanding into other sports, especially focusing on kids athletics.

“Our patent covers a lot of other applications besides golf,” Stuart told Colorado Inno.

“Once you get into kids sports, that’s where I think your grand slam is. We’re going to make some money,” Cuban said. “It’ll be a lot of fun, guys. I might even get back on the course.”

Golfkicks kits are available on their website as well as Amazon. A kit retails for $32.