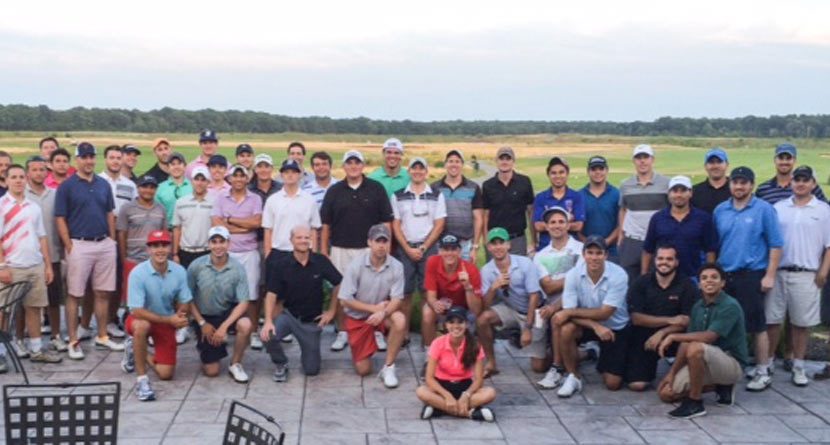 Picture this: You love playing golf but you’re still pretty new to the game. You show up to your local community course, hoping to get out as a single or to play with someone of the same skill as you — beginner with a passion for the game. Unfortunately, you end up getting paired with a “tour bro” — that guy who thinks he’s on tour and yells at himself and talks to the ball more than Sergio Garcia, which ends up ruining your experience.

Fret not, my friend. The GolfMatch app is here to save your round and change the way you find your foursomes.

Developed by frustrated golfer and former digital advertising professional Peter Kratsios, the GolfMatch app aims to provide the ideal golfing experience for players without a foursome.

“Growing up, I was the only golfer out of my friends and family,” Kratsios said. “It forced me to play with random people every single round. I was playing with people who were constantly older than me – which is intimidating as a young, 12-year-old kid. As I got better, I was playing with people who were less skilled, which can create its own problems.”

Kratsios added, “It was crazy to me that there was nothing out there to solve the problems that I’ve had my entire life and that I know a lot of other people have had. Avid golfers who were still beginners, constantly frustrated that they couldn’t find other people their age who were also getting into the game.”

The GolfMatch app provides people an opportunity to meet up and play with people of similar skill levels, eliminating the problems that come with the randomness of playing as a single or twosome.

“I believe there are two very different waves of golfers right now – the old wave and the new wave,” Kratsios said. “The new wave is obviously the millennials … who will determine future generations of golf. I think the new wave golfers who have grown up with technology and social media are more willing to quote-unquote ‘meet’ people before they actually meet them in person — which the app facilitates.”

By entering information about your handicap, how often you play and more, you can connect with golfers in your community. Kratsios believes the app will do more than just find ideal golf matches. He believes it will grow the game.

“We’re trying to allow people to expand their current networks and realize that the community of golfers around them is much stronger than they had thought,” Kratsios said. “We’re also looking to not only alleviate the problems for current golfers, but to break the barriers for new golfers, the hesitant first-timers who need that push to make them feel comfortable getting to the course for the first time.

“The millennial golfer is the one who wants to go out there with their buddies, drink a few beers. They don’t necessarily mind the dress code or the traditional approach to golf. They want to go out there and have a good time, they want to meet new people and stay in touch with these people on social media.”

With that sentiment in mind, GolfMatch is far more than just an app. There’s an active blog on the site that keeps users up to date with the world of golf. The company also gives people the chance to win anything from new putters to autographed hats on its Twitter and Instagram accounts.

The GolfMatch app is currently available for the iPhone and will be coming to Android platforms soon. Also in the works is the ability to actually book tee times on the app. As business often requires, Kratsios was mum on the subject, but did say he was working towards including that opportunity on the app.

“GolfMatch can also be used as an efficient communication platform to help you organize matches with the buddies you frequently play with,” Kratsios said. “Rather than sending mass emails at work or big group text chats, golfers now have a tool that simplifies the communication. Create a match, invite your golf buddies, and a push notification, similar to texts and emails, will be sent straight to your phone.”

GolfMatch is a game changer waiting for its big break. In a world where interest in the game is waning thanks to outside issues, GolfMatch provides answers to issues plaguing golfers for far too long. This is all something Kratsios understands better than most.

“Our mission is to create an ideal golfing experience by driving revenues to golf courses that may not exist otherwise,” Kratsios said. “We’ve seen a lot of interest and curiosity — now we’re starting to see demand.”