Golf’s Personal Allure: When We Only Have Time For Stars 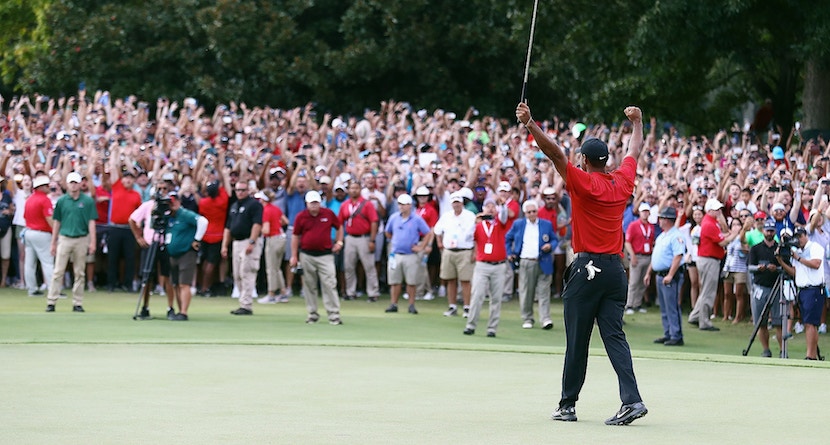 If you look at sports coverage, today we are surrounded by unsubstantiated superlatives. Players and media are so quick to crown the latest G.O.A.T. in a constant battle for our attention.

Zion Williamson remains the latest in a litany of pre-ordained NBA superstars, and he is yet to set foot on the court in a regular-season game. Let’s hope for his sake that he becomes a legitimate superstar, rather than the next Greg Oden. In the NFL, while Tom Brady may well deserve the accolades and constant attention heaped on his every move, we’re barraged with a conga line of instant deifications, from Patrick Mahomes, after just one MVP season, to the Gardner Minshews, Kyler Murrays and an assortment of Cleveland Browns faux ‘saviors’ from Johnny Football to Baker Mayfield.

As one who appreciates the nuances of the games themselves, I’ve bristled at the litany of flavors of the week and over-reliance on superstars to sell the merits of sports. Baseball is continuously lambasted because of its purported lack of superstars, yet I remain captivated by the strategic intricacies of a 162-game campaign, where team clearly rises above the individual. The same is actually true of football where literally every one of the 53 men on an NFL roster plays a critical role, yet the compression of the season and sound-byte culture of media coverage buries the critical nature of offensive linemen in setting the stage for glamour position statistics. Punters, who often control field position that is often the key determinant of a game’s outcome, live in obscurity.

Yes, I’m angry that we don’t take the time to taste the meat under the sauce, but the lens of insights derived from our research across the sports world has reluctantly made me succumb to the reality that in our attention-deficit world, fabricated superstars create easy and instant stories that sell tickets to the less engaged casual fans. The core fans will be there regardless.

Golf is far from immune from this phenomenon. Though thankfully, golf has more staying power than today’s hero-reliant sports landscape, given its strong core group of fans who are also players that can relate to its subtleties. Tiger Woods remains perhaps the most recognizable athlete on the planet, and his adherence to the classic and easy to grasp comeback fable has arguably elevated him to even higher levels than he enjoyed during his initial dominance. I needn’t rehash the myriad statistics that show how his mere presence on a leaderboard is ratings gold, vaulting the attention thrust on the sport from niche afterthought to top story.

Tiger has transcended his sport in ways that no one in our lifetimes ever has. And seriously, who takes the time today to thoughtfully consider anything that falls outside our lifetimes, let alone the last decade or so.

For those old enough to remember, Jack Nicklaus was Tiger before there was Tiger. In a 1970s and 1980s setting where we didn’t have the 24-7 barrage of social media and the golf schedule actually ended before the Fall, the Jack phenomenon was an excellent precursor to Tigermania. I recall attending golf tournaments in my youth and hearing exaggerated roars from a few fairways over, that sounded like someone had holed out from 190 yards, only to learn that Jack had “stuck one” 25 feet away from the hole for a birdie chance.

Before Jack’s Miracle at the Masters in 1986, PGA Tour coverage was constantly searching for the next Jack, and we had many potential heirs to the throne from Bobby Clampett to Hal Sutton to Scott Verplank, all attractive and potentially marketable, but none of whom came close to assuming the Golden Bear’s mantle. We’ve even seen the same when the world wrote off Tiger. It wasn’t good enough for the masses to see how the game was evolving and the pure athleticism of that era’s crop of young players had eradicated the pejorative “round belly” stigma that the sound-byte non-golf media had ordained on professional golfers for much of the years between King Jack and King Tiger.

Only those of us, closest to the game could marvel at the rampant talent on Tour, the sustainability of iconic golf courses that hosted our majors, or the entrance of several formidable new venues that showcased the evolution of golf course architecture to accommodate the bomb and gouge crowd and facilitate today’s onsite spectator experience, which continues to serve as a model for other sports.

As asserted above, I’ve grown to accept the reality of superstar culture, though I’ll continue to chuckle at its hollowness, and I’ll continue to challenge its veracity. But as one who makes a living studying what makes fans and sports consumers tick, I realize that we aren’t turning back; at least not in the short term.

As golfers, we can take pride in the fact that one of the most unique and compelling aspects of our game, is that we can still share in the exhilaration of sticking one five feet from the pin on a par-3 and recognize that for that brief instant, we can identify with the extraordinary skill of the game’s greatest players.

That is perhaps more sustainable and personal than that next NFL flash in the pan.