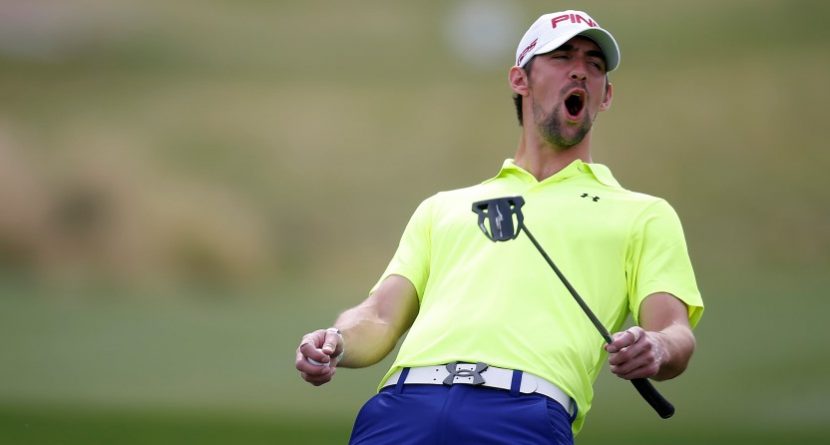 Michael Phelps will be at the 2016 Rio Olympics. Now, whether it’s as a swimmer, a golfer or a TV analyst, that’s still up in the air. But if you’re betting, put your money on swimmer.

The coach of the most-decorated Olympian of all time announced Monday that his prized pupil plans to compete at an upcoming Grand Prix meet in Mesa, Ariz. (April 24-26). It will mark Phelps’ first competitive action since the 2012 London Olympics, where he brought his tally to 22 total Olympic medals, 18 of them gold.

Bob Bowman, Phelps’ longtime coach, says, “I think he’s just going to test the waters a little bit and see how it goes. I wouldn’t say it’s a full-fledged comeback.”

So you’re telling us golf still has a chance?

Since proclaiming he was done with competitive swimming in London, Phelps avidly picked up golf, even working with noted instructor Hank Haney. Phelps said last summer at the American Century Championship (better known simply as the Lake Tahoe celebrity golf tournament) that he’d dropped nearly 30 strokes off his golf scores in a year. But that just meant he’d moved into low-double-digit handicap range. So professional golf was obviously never a possibility, even if that was his wish, and now it appears as if golf was never able to completely satisfy his competitive desire. Phelps was used to being really good at something immediately, and as we all now, that’s not how golf works.

“(Golf has) been an eye-opening experience for me just because I’ve usually been able to pick everything up fairly quickly,” Phelps said last summer, adding, “It’s brutal. I don’t understand how it can be that hard to hit this little, tiny white ball and hit it straight every time. But it just doesn’t happen for me.”

So who knows how many more golf tournaments we’ll see Phelps pop up at, but his celebrity status got him into some of the best pro-ams. And he’ll always have this golfing highlight, which is more than most regular duffers can say: