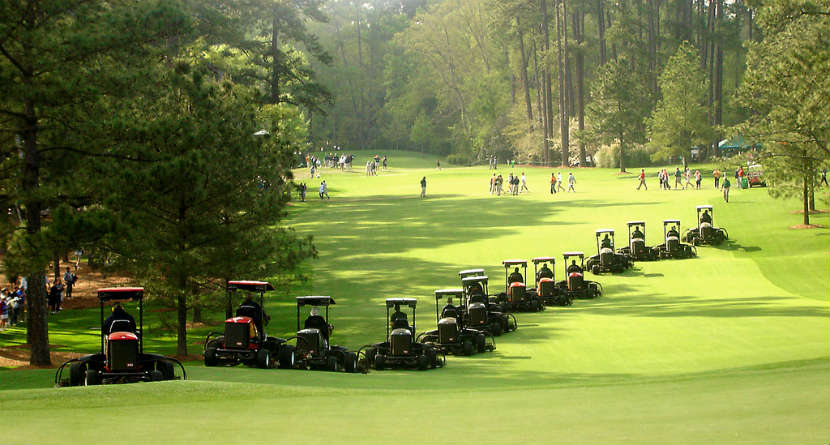 The only thing that may be more difficult than playing the game of golf is understanding the agronomy that goes into maintaining its courses.

In honor of Earth Day, we thought it would be best for you to brush up on a little greenskeeping. From multiple strains of grass to different lengths of mowing patterns, here are 10 quick lessons in a list we refer to as Greenskeeping 101.

One of the most time-tested and well-known grasses not only in the golf industry but around the world is Bermuda grass. Bermuda is generally used in warm weather golf locations, most notably in the U.S. in Florida and Georgia. In terms of positives, this type of grass can withstand heat, be mowed low, be repaired quickly, and it is essentially drought resistant.

On the negative side, it will die easily in colder weather and occasionally you’ll find some holes in it, which are usually overseeded with perennial ryegrass to fill it in. It also has a unique feature called grain which we will go over to the next section. Some of the most famous courses use Bermuda grass, such as Augusta National where the grass is used for their teeing areas and fairways. As mentioned on the previous page, grain is a unique aspect of the game of golf, especially when courses use Bermuda grass for their greens. Essentially grain is the direction in which the grass grows, and if you have any green-thumb experience at all, that usually means it always grows towards the sun.

Whether you like it or not, the grain will affect your putt as it will always pull or push the ball in the direction it’s growing. For example, on a level surface, a putt will be slower into the grain and quicker with the grain. You can tell which way the grain is going by looking at the color of the grass (if it’s shiny, it’s going with you) or by noticing the grass around the cup. Typically the side of the cup where the grass is a little more broken and the edge appears slightly more damaged will indicate the side of the cup towards which the grain is growing.

Bentgrass comes in several varieties and is mostly found on golf courses with cool summers or in coastal locations including in the North, Mid-Atlantic, coastal California and the Midwest. Bentgrass is a member of the poa family and has a fine texture that can withstand constant low mowing.

Another favorite for use on golf courses, perennial ryegrass can be found in nearly any cool-summer region. It has a fine texture and is a clumping rather than running grass. Ryegrass is the primary grass used on the tee areas and fairways at Pebble Beach Golf Links and also can be found at Augusta National when they overseed it. We’ve all been in the rough, but in case you need a refresher, “rough” refers to areas on a golf course outside of the fairways that generally feature higher, thicker grass or naturally growing (unkept and unmowed) vegetation. It’s used to define the intended field of play and penalize players who miss it. Some courses have one length of rough, while others use something called “graduated rough” which makes the penalty for missing the fairway that much greater as the length increases the farther away from the center you go. The USGA will typically use this during the U.S. Open. Poa annua is a type of grass that is used most often on the west coast of the U.S. It has shallow roots and usually will need to be hand-watered if there is a shortage of rain. Putting greens that use poa annua can have a splotchy or streaky appearance to them, because of the many different strains that compose it. Places other than the golf course consider this type of grass invasive as it tends to grow wildly and rapidly. Pebble Beach is notorious for its poa annua greens.

Fescue is a type of grass that’s most commonly found on links courses or links-style golf courses and is usually the second cut of rough or beyond. It’s a sturdy grass that tends to turn a golden color and can grow a few feet high. Escaping from it is basically a total crapshoot. It also can be cut short and used for fairways and greens. A great (or not -so-great depending on who you ask) example of this was used during the 2015 U.S. Open at Chambers Bay.

We’ve heard it before: fairways, greens and enjoy the walk. But let’s dive a little deeper. Fairways are cut at various widths, but according to the PGA Tour’s course conditioning guide, they should be between 25-30 yards at the professional level. Mowing heights in the range of 7/16 – 1/2 inch, are usually specified depending on conditions.

Greens are recommended to typically run between nine and a half to 11 feet on a USGA stimp meter and should be firm, not hard for tournament play. Generally, collar or fringe width is set to 30 inches unless otherwise dictated by the golf course design. Height should be between a quarter and a half an inch.

Unless your local muni is something like TPC Sawgrass, chances are these measurements will differ slightly.

Zoysia is a low maintenance type of grass that can be used in a wide range of climates, besides deserts and colder western locations. It is a member of the poa family, is deep-rooted, clumps, and holds its color well. Because of its fine blades, it usually is mown to three-quarters of an inch. Due to its durability, it is often used on municipal golf courses. One notable Zoysia grass course was the Olympic Course in Rio which played host to the 2016 games.

There are a lot more to bunkers than meets the eye. According to the PGA Tour course standards, the uniform settled depth should be four to five inches throughout the bunker floor and be free of debris. If steep faces are part of the design, these areas should have no more than two inches of sand to prevent buried lies. Some of the best courses in the world actually import sand in to fill the traps. Unfortunately, we can’t say the same for your public track!