Happy Birthday To The King 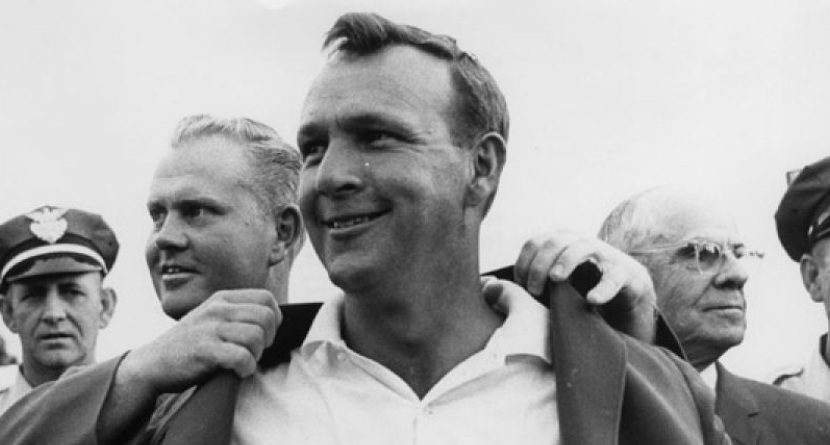 When your nickname is “The King” you’re a big deal and in the sport of golf there’s only one man deserving of that title. Arnold Palmer transcended the game in ways people will forever talk about. Hard to believe that same man turned 87 years-young this past weekend.

To celebrate his birthday, Golf.com put together a list of the 87 reasons we all love the man we affectionately call Arnie. Here are a few of the best:

His eternal warmth and decency to everyone he meets, no matter their station. In A Good Walk Spoiled, John Feinstein tells of Palmer making the cut at Bay Hill in 1991 at age 61. Peter Jacobsen went to a Winn-Dixie and asked for a cake that could feed 200 and would be ready in the morning. “Impossible,” the guy at the supermarket said. “But it’s for Arnold Palmer,” Jacobsen said. The Winn-Dixie sourpuss brightened. “Do you need it tonight?”

His wanderlust. As a kid, Palmer built planes out of balsa wood. As an adult, he took up flying after a friend of a friend took him up in a Piper Cub. Palmer went on to own several planes, flew with the Blue Angels, landed a military jet on the Eisenhower aircraft carrier, and set a record by circumnavigating the globe in a Lear 36 in less than 58 hours.

He wasn’t just a golfer…he was an athlete

He transcended golf, making the cover of Time in 1960. He was Associated Press “Athlete of the Decade” in the 60s.

His goofy swing and even goofier follow-through and putting stance gave the rest of us hope. Said Palmer, “My dad [Deacon] said the quickest way to wind up back in Latrobe was by making changes to your swing.”

That time he shot his age

He’s got his own beverage