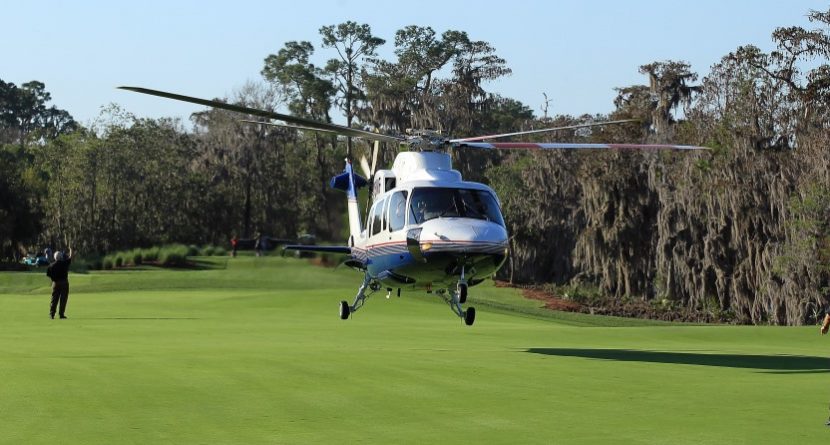 Golf is often used in connection with charity events. Primarily it’s in the form of tournaments played to raise money.

Becoming increasingly more common, however, are now helicopter ball drops. Participants “buy” a ball, it joins dozens of others in a helicopter, and then those balls are dropped or dumped onto a green. Closest to the pin wins a prize, and all the rest of the money goes to a good cause.

There’s the one-by-one method, which just doesn’t seem very fun or effective. The odds of dropping a single ball into the cup from a helicopter are surely better than hitting a hole-in-one, but still not very good.

For our chances, we’ll take the dumping method with thousands of balls. Such was the way in which a charity stunt at Cowdray Park Golf Club in England’s West Sussex county yielded two holes-in-one. So as not to damage the green, the club built a temporary hole in the 18th fairway.

Check out the video:

According to the Portsmouth News, 1,000 golf balls were purchased for 5 British pounds each (roughly $8.40), and the two winners will collect £500 (nearly $840). The rest of the money totaled close to £4,000 (roughly $6,700), which will go to the Treloar School and College, a special school for severely disabled children.

“As an idea it sounds quite simple, but the level of paperwork is really high and I almost know by heart Article 129 of the Air Navigation Order,” said Atlas Helicopters’ managing director, Mike Burns. “However compared to what the students at Treloar achieve every day, it pales to insignificance.”

Other Hot Links:
– Warning: Golf Carts Could Be Hazardous To Your Health
– The Fringe: Poulter Asleep On his Feet & Kuchar’s New Deal
– Derek Jeter Gets New Set of Clubs, Custom Bag from PGA
– Ian Poulter is Giving Away His Ford GT… Seriously
– U.S. Open Ticket Prices Plummet From 2013