High School Golfer Gets Chased Down By Angry Goose 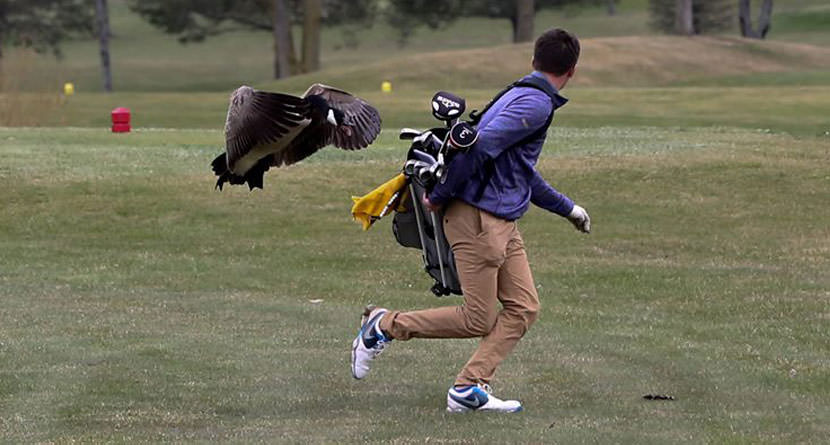 Golfers tend to learn pretty quickly that geese are very protective of their nests and young. Any golfer who has encountered a gaggle of geese is all too familiar with the hissing and flaunting of their wings, however, a high school golfer in Michigan learned that lesson in a dramatic way.

During a round of golf this past weekend, Concord High golfer Isaac Couling got a little too close to some geese prompting the guard goose to take action. The result was a series of photos that are almost as good as a video of the incident. A parent of a Blissfield golfer captured the incident on camera.

Couling told the Detroit News that as he ran away the bird kept charging at him. He remains a good sport about the incident.

“Yeah, but no one came to help,” Couling, who said he ran and dived three times before shooing the goose away with his foot, told The News on Monday night, with a laugh. “All the coaches saw it from the clubhouse. You could see it from there.

“It’s pretty crazy. All my friends were talking about it.”

When asked the story behind the photos, the Blissfield Athletic Department Twitter account described that the golfers were trying to respect the gaggle’s nest, but the guard goose was having none of it.

The golfers just finished teeing off and were walking down the fairway. To the left there was a goose nest and the golfers did a good job of avoiding it but the guard goose (hanging out on the far right thought differently.

Just his pride was hurt.

The course it happened at is Wolf Creek Golf Course in Adrian, Michigan. Blissfield is located northwest of Toledo, Ohio while Concord is southwest of Jackson, Michigan.

This isn’t the first interaction we’ve seen with geese and golfers this year. The Social Media Golf Association on Instagram shared a video of a similar occurrence when two golfers attempted to retrieve a ball that landed too close to a goose-protected area. (Warning: there is some strong language in the video.)

These types of bird run-ins have become so commonplace that they even made an appearance on noted golfer Larry David’s show, Curb Your Enthusiasm.

The moral of the story is simple: if there are geese hanging around your course, exercise extra caution when in their presence.