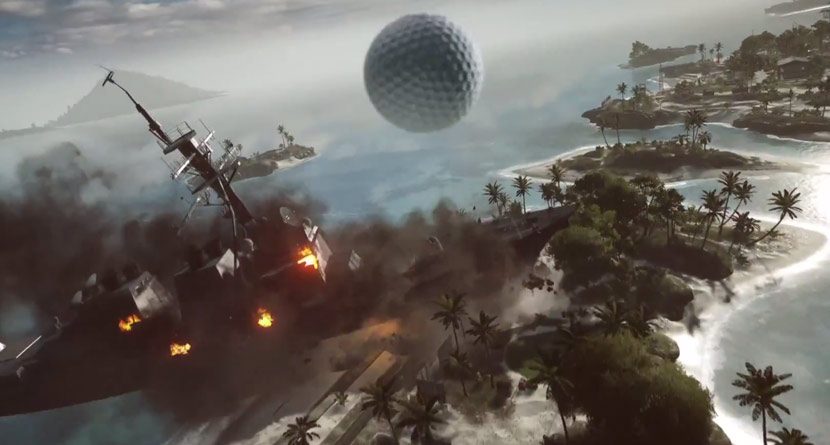 EA Sports may not have released a golf video game in 2014, but it’s gearing up for what could be the best golf game of all-time in 2015. In October, EA ended its relationship with Tiger Woods and dropped his name from the game’s title, but on Monday, EA bounced back. During its E3 conference, EA announced its new golf game due out spring 2015, dubbed “EA Sports PGA Tour,” and it looks insane.

It’s the first golf title from EA without Woods’ name, but by the looks of the first official trailer, the game is making up for it with battleships and crazy courses. Yeah, battleships.

The Ian Poulter look-alike hit quite the long drive to make it over that battleship crashing into the beach. That might be the best drive “Poulter” has ever hit.

It’s not everyday you get to hit a shot like that, but EA Sports is giving gamers the chance to do so on “extreme fantasy courses.” I personally can’t wait to see what other courses EA has in store for this game, because this island course looks crazy.

While not much has been said about the game so far, Brent Nielsen, the game’s executive producer at EA was very excited about the changes he could talk about, most notably, the Frostbite 3 engine.

“Frostbite 3 from an engine standpoint, is one that is really caters on rendering beautiful environments and golf is on a bit of an island when if comes to sports games,” Nielsen said. “You’ve got hockey, basketball — which are arena based games in a fixed environment. In golf you’ve got these dynamic environments that are really the game and thats where the strength in frostbite lies.”

What does this mean for load and game times?

“It allows us to do the types of things that we thought would be game changers for us,” Nielsen said. “It allowed us to stream our environments unlike in previous games where you’d have to wait for the other holes to load. That’s completely gone now so right off the bat, you’ve shaved 15-20 minutes off a round of golf.”

As far as more crazy feature and surprises like the battleships, Nielsen remained quiet but did infer that there would be more where that came from.

“Historically we’ve done fantasy courses and they’ve always been really popular even with out core fans and we thought that using the frostbite 3 engine we could leverage some of our other great properties and that might be a fun and different way to play golf.”

It’s too bad we’ll have to wait nearly a year to get our hands on the game. My thumbs are already itching to play.