How Much Does A Scuff Affect Your Golf Ball? 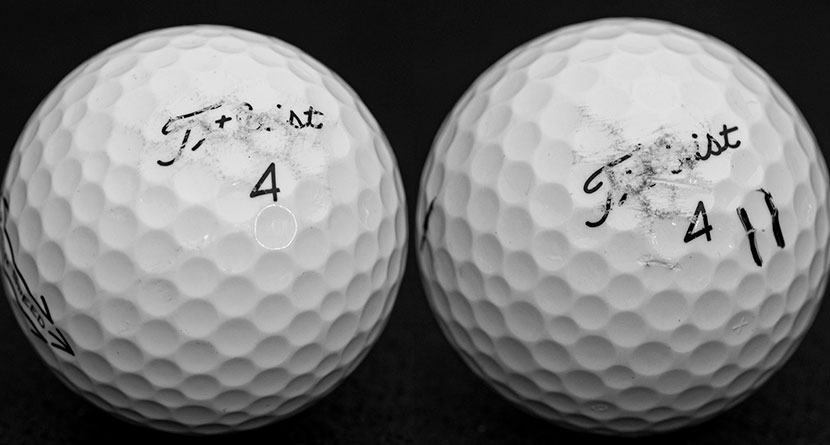 Golfers, by and large, are aware of mud balls.

And if we’re being honest with one another, we tend to just clean the junk off the ball before hitting it.

We know that a chunk of mud on the side of the ball will likely significantly impact the way the ball will fly, and we’re not playing for fingers and toes, so why try to play a guessing game? The pros have to deal with it, and so do amateurs in competition, but during a casual round, there’s no reason to torment ourselves.

However, when it comes to scuffs on the golf ball, amateurs are more than happy to play a golf ball that’s had its fair share of scratches and scrapes. It’s almost like a badge of honor to play the same golf ball for multiple holes and rounds for some.

But have you ever considered what that old, beat-up golf ball may be costing you in accuracy and score? Luckily, the good folks at MyGolfSpy had the initiative to put this question to the test and the results are pretty surprising.

Using a baseline (ie. new golf ball) and testing it against a light scuff and a moderate scuff, as well as, just for fun, a balanced scuff (a ball that was evenly scuffed on both sides), a partially sanded and core-only, the results may make you think twice about shrugging off a cart path or tree mark.

A quick background: MGS’ Golf Ball Test was conducted at Scottsdale National Golf Club using a robot to ensure accurate results. For the scuff test, the robot swung a driver at 100 MPH club speed and produced slight discrepancies not only in spin axis and distance, but more importantly, accuracy.

The light scuff, which MGS compared to your normal wear and tear from hitting a path or tree, produced most noticeably “a pronounced, though not massive, shift in the spin axis” which took the ball nearly 10 yards offline.

While hitting a driver 10 yards off your intended target may not seem like much, it’s a noticeable deterioraition from the baseline, and perhaps enough to make you second-guess your swing mechanics.

The moderate scuff, which is a very noticeable abrasion to the cover of the ball, had a very significant effect on the spin axis, peak height, distance and accuracy. On average, the moderatly-scuffed ball flew some 40 yards shorter and almost 50 yards offline. That’s not nothing!

The balanced scuff more or less acted similarly to the light scuff, but the data showed that the manufactured scuffs were probably not perfectly balanced, which could translate similarly to a multiple-scuffed ball.

So, what’s the takeaway? According to MyGolfSpy, “if you’re trying to figure out if it’s time to replace your ball, a good rule of thumb is that if there’s enough damage that you can feel it when rubbing your finger over the ball, it’s probably best to toss it in the shag bag before it impacts your score.”

Or, if you want to act like a pro, just yell “SCUFF BALL” and everyone will know your poor shot wasn’t your fault.