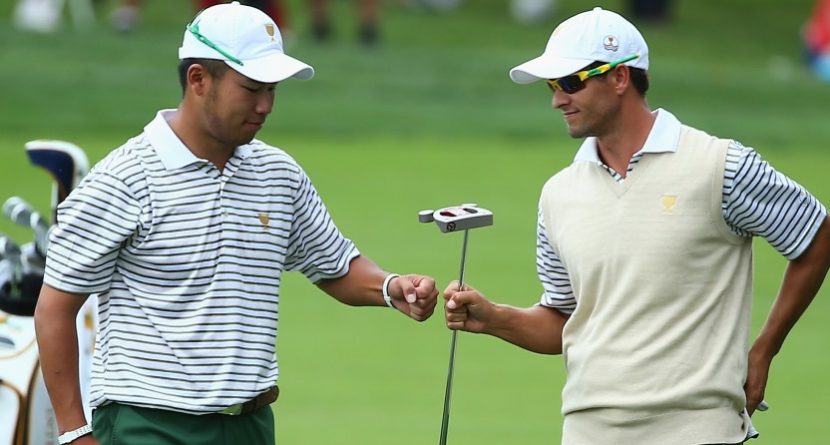 It’s all about who you know. One simple connection is how the Presidents Cup international team came to be dressed this week in stylish Peter Millar apparel.

For events such as this, each team’s clothing supplier is at the behest of the team captain. Generally, that captain already has ties to one clothier or another, so it’s simply a formality that said company will outfit that captain, his assistants and his 12 players.

But when a captain, such as the internationals’ Nick Price, owns no allegiance to an apparel provider, he just goes with who he knows. And Price is pals with Barry Pry, who runs the embroidery and corporate sales divisions for Peter Millar.

So, soon after being named captain of the international team for the first time in May 2012, Price gave Pry a call. And within weeks, the Peter Millar design team flew down to Florida to present Price and his wife, Sue, with some clothing options for the Presidents Cup.

“We were very, very honored that he reached out and chose Peter Millar,” said Todd Martin, the president of Peter Millar’s golf division. What Price saw in that meeting, he liked. For the most part, those original designs from last summer are what the international players are wearing this week.

“We had a couple last-minute tweaks and changes, but really they were designed over a year ago, and with direct input from the captain. Obviously, we offer our opinion on colorizations and fabrications and what we think would work well for players. So it’s really a collaborative effort, but at the end of the day, it’s the captain’s decision,” Martin said.

Peter Millar is well known as a natural-fiber company, with its mercerized shirts and luxurious 12-guage cashmere sweaters, both of which the international team is wearing. The squad’s pants, which will vary from green to blue to gray, are four-way stretch trousers, allowing maximum comfort for the players.

“A lot of these players are used to technical products, so you need to make sure you straddle both angles – where you’re not too, too technical or too, too traditional. So you want to try to go right down the middle,” Martin said.

As opposed to designing clothes for an American team – which Peter Millar did for the 2010 Ryder Cup and 2011 Presidents Cup – coming up with color schemes for an international group is much less restrictive. Thus, Tarheel blues and rich blacks and Kelly greens will all be spotted this week.

“We really wanted to keep it elegant, but without going with a predictable palate,” Martin said.

So far, so good. Peter Millar’s merchandising and design staff is on-location at Muirfiled Village for last-minute alterations, and just to make sure things go smoothly. The feedback from the players and coaches has been positive. Same goes for the wives and girlfriends too, who are also being dressed this week by Peter Millar, in outfits primarily chosen by Sue Price.

But it’s not always so easy. The company did a stretched cotton trouser for the U.S. team at the 2011 Presidents Cup in Australia, and Martin said Tiger Woods wasn’t especially fond of the pants because he’s used to sporting more technical trousers. The year before at the Ryder Cup, when Corey Pavin was the U.S. captain, he opted for a lavender-type sweater color. Because it deviated from the traditional red, white and blue, Martin said “it certainly got a lot of people talking.”

The Americans this year are being supplied by Ashworth (tops) and Weiss Goldring (pants and formal wear), while the women in their lives are receiving clothes from a number of different clothiers. Peter Millar is handling it all for the international team. Many of the players were fitted back in May when they came through Muirfield Village for the PGA Tour’s Memorial Tournament. But not everyone was there, and not everyone on the team was known. And just because a player is measured in May doesn’t mean he’ll be the same size in the fall.

“You always kind of hold your breath because you don’t necessarily always know who all the team members are, so you have to make extra units in case the captain’s picks happen to be on one side of the size scale, either small or large,” Martin said. “And guys change sizes over the course of the year … you always have those last-minute changes where guys may have lost some weight or beefed up in the gym a little bit. So you’ve got to let a jacket out here or there, or let out a waistband and make those last-minute alterations.”

Yet, with the action now underway, Peter Millar’s job with the international team is essentially done. It’s time to just sit back and watch the company’s hard work in action.

“Hopefully the international team will put up a little bit more of a fight than they have in recent memory,” Martin said, adding, “Maybe the clothes will make a difference.”