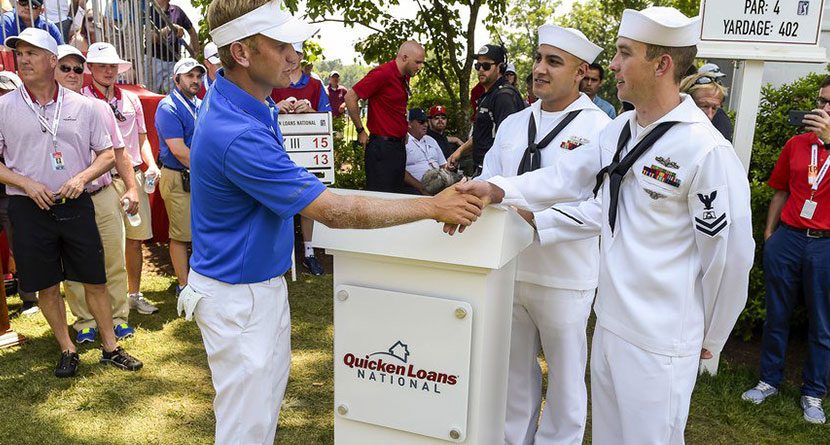 One of the hottest topics in sports and popular culture is San Francisco 49ers quarterback Colin Kaepernick’s refusal to stand during the National Anthem.

“I am not going to stand up to show pride in a flag for a country that oppresses black people and people of color,” Kaepernick said. “To me, this is bigger than football and it would be selfish on my part to look the other way. There are bodies in the street and people getting paid leave and getting away with murder.”

As expected, Colin Kaepernick is sitting down tonight during the Star Spangled Banner.


How does this translate to golf? Billy Hurley III famously attended the Naval Academy in Annapolis, Md. and served overseas in the Navy. Hurley has since made his way onto the PGA Tour where he is playing this week at the Deutsche Bank Championship in the FedEx Cup Playoffs.

Naturally, having a military background and it being the hot-button topic of the day, Hurley was asked about his stance on Kaepernick’s boycott. Dave Shedlowski of GolfDigest.com spoke to Hurley about it.

Asked at the Deutsche Bank Championship to comment on Kaepernick’s controversial actions prior to Sunday night’s exhibition game against the Green Bay Packers in San Francisco, Hurley pointed out that the military, “is here for all citizens regardless of how they feel about things going on with the country.” Hurley, 34, graduated from Annapolis in 2004 and rose to the rank of Lieutenant while serving in the Navy until 2009.

“It’s an interesting situation, and a delicate one,” Hurley began, “but he’s made it clear that he’s not trying to disrespect the military. He’s got his own personal issues as it pertains to race problems that he’s trying to have addressed. But I have seen where he has stressed he isn’t anti-military. Now, do I think there’s a better way to go about it? Sure. But that is his right as an American. It’s what the military is there for. It’s not just to protect the people of this country who like America. We’re here for all citizens regardless of how they feel about things going on with the country. We take an oath to the Constitution, and to support and defend the Constitution. And he’s exercising his right under the Constitution.”

Kaepernick said he is taking a stand against various forms of racial inequality in America, and that he would continue to sit for the anthem until those issues are addressed. “The fact that it’s blown up,” Kaepernick said this week, “is a good thing.”

Hurley isn’t so sure.

“He’s made the news, I’ll say that,” Hurley said. “I don’t know what he’s trying to do. I’m not sure he’s accomplishing what he wants to accomplish with this decision. It’s clear to me in the coverage I’ve seen that he’s not gaining much traction with his message.”