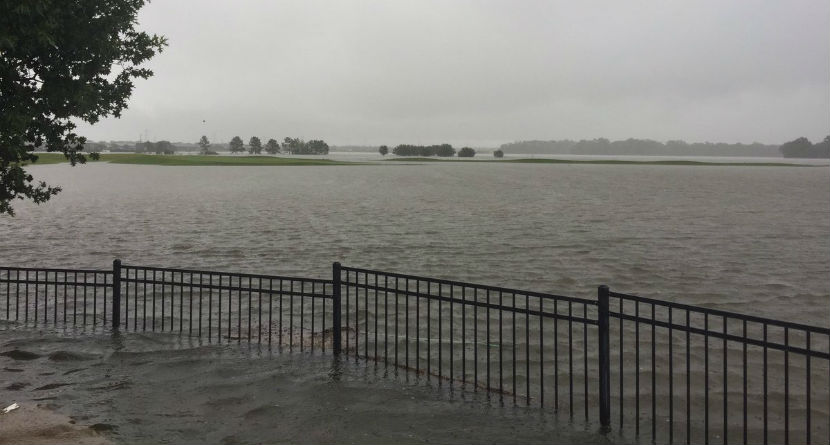 Hurricane Harvey has devastated southern Texas bringing unprecedented rain, severe flooding and displacing thousands of people since Friday. One of the hardest hit areas hit is Houston, the fourth largest city in America.

While golf courses aren’t a priority in these dire times, images of them submerged in water provide a terrifying reminder of the power of Mother Nature.

“This is not over yet,” Steve Timms, president and CEO of the Houston Golf Association, said according to Golf Digest. “This storm got caught between two high-pressure systems. They’re usually out of here, but this one camped over south Texas. It’s now backed up, and they’re projecting that by [Monday night] it’ll be back in Gulf of Mexico, which could have further strengthening. We could be in for a forecast of 15 to 20 inches of additional rainfall.”

The association’s offices are adjacent to the Golf Club of Houston, which has played host to the Shell Houston Open since 2006. The tournament course is bisected by the Greens Bayou, which carries water from north of Houston down to Galveston Bay and into the Gulf of Mexico.

“It’s been out of its banks since probably yesterday [Sunday] at about 9 a.m.,” Timms said. “We’ve had literally massive flooding. We’ve never seen anything like it.

“If it were to stop raining now, I would say we’re probably at least another day or two before we’ll see any significant receding of water. It’s a massive amount of water. We’ve received so much rain upstream of us that it’s got to come through major bayous. The longer you keep water on turf, the more silt and turf damage you’re going to have. I just can’t even start imagining how much damage there will be. Obviously, it’ll be significant. One thing we do is that greens and tees are built up out of the 100-year floodplain to protect them. But this is not a 100-year event. It’s more like a 500-year event.”

“I just can’t even start imagining how much damage there will be. Obviously, it’ll be significant. One thing we do is that greens and tees are built up out of the 100-year floodplain to protect them. But this is not a 100-year event. It’s more like a 500-year event.”

Here’s a look at some more of the catastrophic flooding at other courses in the area:

This is Champions area.. pic.twitter.com/vmgur5Cegp

If you’re able to help in this time of need, you can donate to the Red Cross here.