Iconic Golf Shots in ‘Tin Cup’ Not So Easy to Recreate 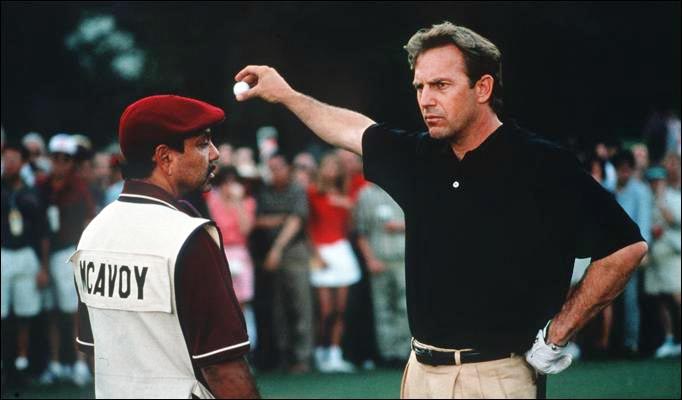 there are plenty of stories from those who helped create it — from Kevin Costner’s one-putt to the famous “Pelican” shot from the bar, there’s a story to go with the scene.

More specifically, it’s a good time to remember the final golf scene of the movie where Roy “Tin Cup” McAvoy and David Sims (played by Don Johnson) are coming down the stretch with only the treacherous 18th hole standing between them and glory.

For those of you who haven’t seen it and are totally fine with the ending being spoiled for you, here’s the iconic scene:

The 18th hole from the U.S. Open in the movie is actually the 453-yard par-4 fourth hole at the Deerwood Golf Club, just north of Houston, Texas. The hole, which is the No. 1 handicap on the course, is considered to be one of the toughest holes in the state of Texas.

According to Darrell Fuston, Director of Golf for Kingwood Country Club, “It’s just an incredibly demanding par 4. The prevailing wind is normally into you off the tee, so hitting the fairway is very difficult. If you miss the fairway it’s an automatic lay up. It’s one of the best golf holes in Texas.”

Much like at Merion, where Ben Hogan hit his famous 1-iron, there’s a plaque on the spot where Kevin Costner (spoiler alert!) tried to hit the hero shot that foiled his chance at U.S. Open glory. Don’t worry, (spoiler alert!) Tin Cup still gets the girl. Unfortunately for the casual fan, you’d have to “know someone who knows someone” to recreate Roy McAvoy’s famous shot, as the Deerwood course at Kingwood Country Club is private. I’d like to tell you, “don’t feel bad, there’s always the course where ‘Caddyshack’ was shot,” but alas, Grande Oaks Golf Club in Fort Lauderdale, Fla., is also private.

While these courses may be a no-go, you could try your hand at recreating Tin Cup’s first memorable shot from the movie. You know… the one where (spoiler alert!) Phil Mickelson and Craig Stadler bet Sims (Johnson) that McAvoy (Cosner) can make a risky shot over water. That was filmed at the Tubac Golf Resort & Spa in Tubac, Ariz., which is open to the public.

While you’re at it, you could try to recreate the “7-iron bet” as well since it takes place at the same course, except you’ll probably get thrown out if you drill a ball into the parking lot.