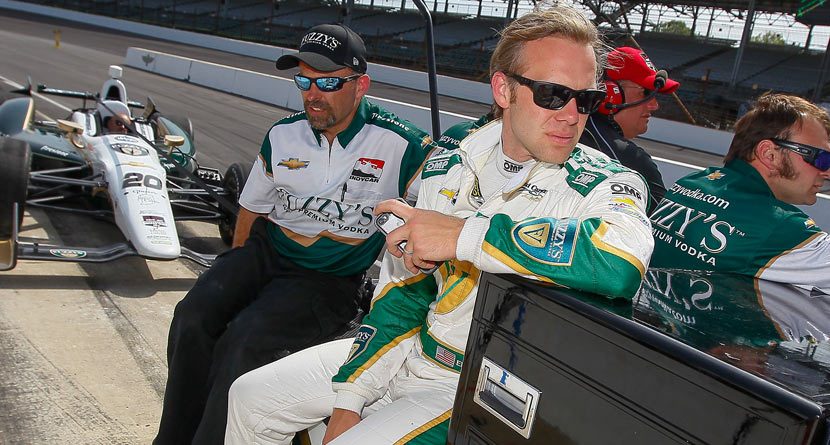 Indianapolis Motor Speedway is hallowed ground for anyone who has ever driven a race car, open wheel or otherwise. But for Ed Carpenter, the pole sitter for this year’s Indianapolis 500, the track feels like more than that. It feels like home.

Carpenter grew up near the speedway. His stepfather is Tony George, the former CEO of the speedway, and when he starts his engine for the 98th Indy 500 on Sunday, it’ll be his grandmother, Mari Hulman George, who gives the command.

Carpenter, 33, had his first job just outside the speedway. He worked as a cart wrangler when he was 14 years old at the Brickyard Crossing golf course. Here he would develop a love of going fast, a dream he’s still fostering today and one very valuable lesson after crashing a golf cart.

“I washed the carts, parked them, charged them, cleaned clubs — whatever they wanted me to do. It was a fun job,” Carpenter said in an interview with USA Today. “I was old enough to know at the time that I wanted to be racing out here at the speedway.”

Golf would again come into play in growing Carpenter’s dream of racing at Indy. When his family-owned team collapsed, he started his own team, Ed Carpenter Racing, and found sponsorship in a unique place: Fuzzy Zoeller.

That’s right, Fuzzy Zoeller. More particularly, the 1979 Masters champion’s vodka. Fuzzy’s Premium Vodka has now been on the side of Carpenter’s ride since 2010.

Then, Zoeller said of the partnership and the Indy 500, “I’ve won some majors in golf, and there is no doubt the Indianapolis 500 is the major championship in motor racing. I’m very excited about our partnership. I would love to add another major to my resume. Ed’s resume on ovals is impressive, so we think we have a shot.”

Have a shot, they do. Carpenter has had great success on ovals over the course of his career, and, despite finishing a disappointing 10th in last year’s 500, he believes he’s got his best shot to add his name to the Borg-Warner trophy.

All thanks to hard work, life lessons learned on the links and a little help from a two-time major champion.