Inside a Day of Equipment Testing with Tiger Woods 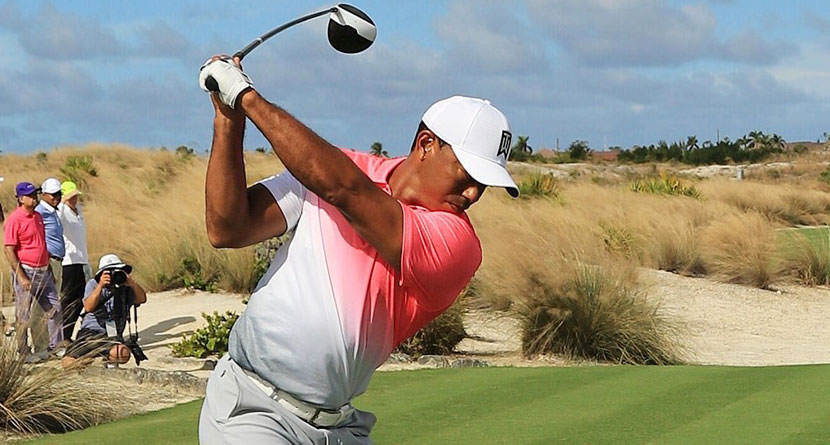 Professional golfers are extremely picky when it comes to dialing in their equipment. Hours upon days upon weeks are spent at the range pounding golf balls to find the perfect combination of club, shaft and ball, and it should come as no surprise that Tiger Woods, the greatest player of his generation, is a little pickier than most.

For Woods, since signing with TaylorMade in the beginning of 2017, he and his body have undergone a unique transformation that has made his getting fit into his equipment nearly impossible until recent months.

A fascinating peek inside the meticulous mind of Tiger Woods during equipment testing. Via @GolfDigest #golf https://t.co/dGOGifIXWL pic.twitter.com/VmlHlIBRRH

With TaylorMade’s new M3 and M4 lines being released earlier this week, GolfDigest.com’s E. Michael Johnson was invited down to spend some time with Woods as he got his equipment ready for 2018.

The entire piece is worth reading if you want to know what all goes into a professional putting together their bag, but here are some selected highlights that show just how dialed in Woods is when he is testing.

In his first official testing session since joining TaylorMade in January of last year, Woods displayed the exacting attention to detail he did as a 28-year-old at the top of his game. Instead of projecting as a nearly 42-year-old seeking a magic elixir to boost his game, Woods displayed his vast knowledge about the nuances of golf equipment. If the company’s tour reps thought they were getting a player who would gush about clubs like an equipment chat-room nerd, that was dashed quickly. Woods isn’t built that way when it comes to his sticks.

For Woods, ball flight is everything. In 2003, he said, “I’m all about how the ball flies, how it looks shortly after it leaves the club,” Woods said. “If I look up and don’t see the ball right there—I mean, right where I expect it to be—then we have a serious, serious problem.”

Not that it’s an insurmountable one by any measure. TaylorMade VP of tour operations Keith Sbarbaro noted it could be the center of gravity location and they would measure one of Woods’ old sets to match it up. Additionally, the company has brought in former Nike employee Mike Taylor, who worked on Woods’ irons and wedges when he used equipment with a swoosh.

Woods is well-equipped to notice anything amiss with his irons. He has used the same iron specs since he was a kid, saying he only changed the lie angle at times when a swing change called for it. He’s also aware that alterations are easier to make today, recalling that during his early years as a pro he would need to go through eight or nine sets of irons and cherrypick clubs from each set to get the CGs to match.

After 90 minutes during which he hit close to 100 balls, Woods was closer to perhaps a new driver, but insisted there was a lot of work still to do, mostly on course.

“It’s nice that we can cheat out here and use Trackman, but ultimately I need to see how it fits on the course,” said Woods. “Can it hit a low cut, can it hit a low draw? I want to ride the wind. I want to challenge this corner. I want to take it over that bunker. Things of that nature. For instance, right before the Hero, I had a 3-wood I was using last year before I stopped playing. On the range I hit it fantastic. On the course, I couldn’t hit it. It had too much toe droop right before impact. When I tried to turn it over, I’d hit this toe-pop-up. The golf course showed that. I had to hit golf shots. It’s not just about making it look good [on the range].”

Of course, as with any session, there are some lighter moments as well. Like when Woods recounted that Confidence irons were his first set until he saved up enough money to buy a set of Mizuno irons. Or that he was aiming at “the guy in the yellow shirt” at the far end of the double-sided range. His keen sense of feel was on display as well. Like Ted Williams, who could tell if a baseball bat was off by fractions of an ounce, he cast aside the last driver he hit because of an air bubble in the grip only he could feel. Right to the last swing, Woods was focused.