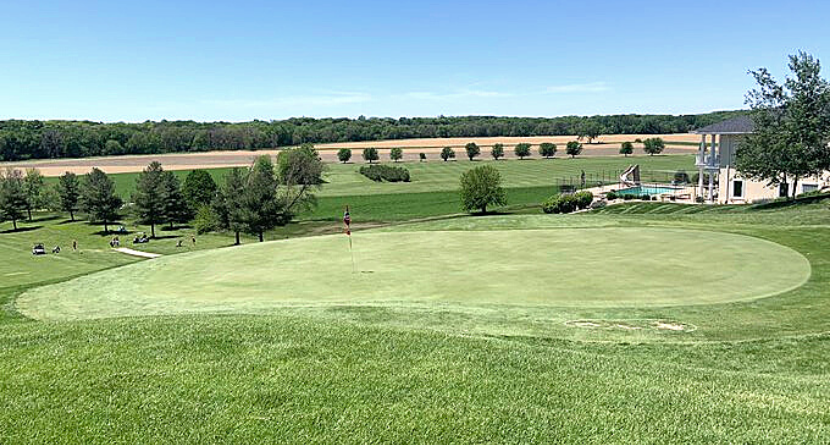 The 18th hole at River Valley Golf Club in Adel, Iowa produced a putting horror show during the first round of the state’s two-day girls 3A championship, raising an age-old question that all those tasked with preparing a golf course for competition must face: where’s the line between challenging and unfair?

A short video clip of the carnage, originally shared by local college journalist Jake Brend on May 27, has gathered nearly two million views on Twitter. Players appear visibly frustrated as delicately struck tap-ins slide past the cup and tumble over the green’s precipitous front. Uphill putts that come up short wind up rolling back to player and settling at their feet — or further.

“Feel bad for these girls!” Horschel posted in an Instagram story. “Absolute joke by these officials to embarrass these young ladies. These officials should be banned from setting up a course in the future. This isn’t a accident … they knew what they were doing when they set up that hole location. I bet these young ladies handled it better than I would!”

Today at the Girls 3A State Golf Tournament at The River Valley Golf Course in Adel, the average score on hole 18 was a quadruple bogey.

No, the golfers weren’t bad, but this had to have been the most unfair pin placement I’ve ever seen. This slope gave the athletes no chance. pic.twitter.com/F7OyqIjbkO

According to Brend, the average score on the hole during Friday’s round was a quadruple-bogey 8. Earlier he had estimated the average score to be a couple strokes worse than that after witnessing “numerous 10-putts.”

Not sure if you can tell from this picture, but this is without a doubt the most difficult pin placement I’ve seen in my life of playing and watching golf.

I’ve seen numerous 10 putts and I would guess that the average score is at a sextuple bogey (+6). #iahsgolf pic.twitter.com/rSXnxtSdsr

I think Curt nailed this. He hit the right tone in defending his thought process, offered a thorough explanation and showed personal accountability. 👏🏻 pic.twitter.com/RDjkJzXlMy

In short, Wahlert said he misjudged how some recent rain would affect the speed and then compounded his mistake by failing to test the green before play began. He commended the players who “navigated the adversity” by playing practice rounds and consulting with coaches to formulate a strategy, and he recognized how regrettable it was that a social media post had overshadowed the event.