GolfStinks: Is Your Foursome Ruining Your Golf Game? 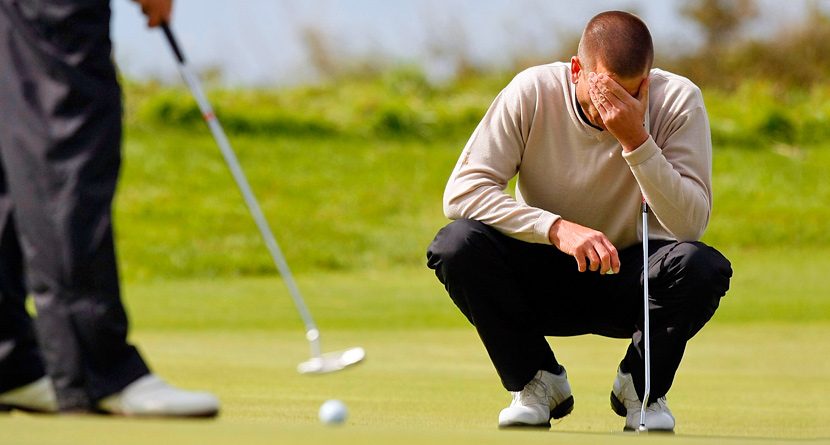 It’s great when you have friends that also golf. You get to spend time together strolling in the great outdoors and having good conversation – all while you’re enjoying the game you love. Nothing could be better than that, right?

Unless, of course, you’re not enjoying it at all. What you rarely see is a 1 or 2 handicap seriously engaged in their game while his three companions are hacking-up the course behind him. While there might be the rare exception (or a chance pairing by the starter at the first tee), this is not something typically seen in a tight-knit foursome.

And it’s like this for one reason: Vast differences in skill-levels within foursomes ultimately leads to frustration and/or resentment by one or more in the group. Now some of you might be thinking; “I actually like playing with someone better than me because it makes me step-up my game.” Sure – that makes sense…If you are say an 18 handicap and you’re playing with a 10 handicap. But have that 18 consistently play with a 1 or 2 handicap and then see how much fun they’re having. After a while, many golfers will leave the group to play with someone “more their speed” (sound familiar)?

Conversely, the lower handicapper will complain that all the poor play surrounding them is actually bringing down their game. Constantly waiting on someone while they hack-up the course with a blasé attitude will start to have a psychological effect on you – and as a result, you might adopt (even unknowingly,) the same blasé attitude, (leading to higher scores).

Back9’s upcoming animated series “Of Course” features a foursome you don’t want to be stuck playing with… buy you’ll definitely want to watch!

So the end result of this is four golfers of similar skill-levels typically end up playing together, (birds of a feather…).

For example: I have an 18 handicap and have played with scratch golfers. While those rounds have been cordial, they have rarely been friendly. There’s usually little conversation and mostly this is due to the scratch golfer trying to focus on his game while at the same time ignoring mine!

Now don’t get me wrong, I’m not saying scratch golfers are jerks – it’s just they’re in a completely different frame of mind than I am. They are trying to tame the course and much of their focus during the round is on doing just that. But they have the game to pull it off.

I, on the other hand, do not. I am there solely to have fun. If I shank one in the woods or get three doubles in a row, it’s not going to ruin my day, (though I’ll most likely be upset at the time).  What’s far more important to me is just being out on the course and enjoying my round the only way I know how: By simply playing. Thus, I tend to gravitate toward golfers of a similar mindset, (and subsequently, a similar handicap – like my GolfStinks pals). I don’t think this is a bad thing, it’s just human nature.

So if you feel like you’re not enjoying golf because your foursome isn’t at the same level you are, (regardless of your handicap,) don’t be afraid to play elsewhere even if these people are friends. If you’re ultimately not having fun, it’s probably time to make a change.

I’ll bet the rest of the group will end up enjoying their games more too.

Other Hot Links:
– TV Preview: Back9Network Original Programming
– 9 Things Every Golfer Should Be Thankful For
– Does It Drive: The Flying Feast (Video)