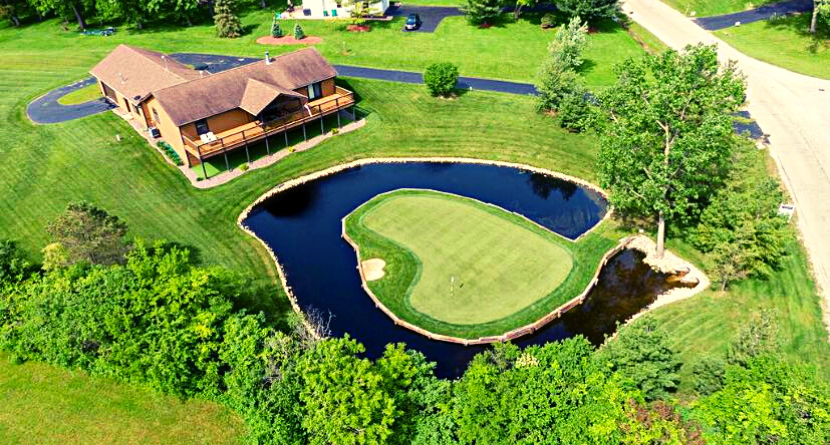 As houses with scaled-down replicas of iconic golf holes go, this one in Ingleside, Ill., is better than most.

That’s right: the home — which was spotted on Zillow.com by Barstool Sports blogger Chaps — features in its front yard a miniature version of the 17th green at TPC Sawgrass. And for the listed price of $560,000, it can be yours.

I found an insane house on Zillow. Who wouldn’t want a replica 17th Hole at TPC Sawgrass pic.twitter.com/TN207PdmF4

As Chaps notes, the Zillow listing includes some details that only add to the appeal for any golf nut. There are five separate tee boxes from which to dial in your wedge distances, and the “meticulously maintained moat” encircling the putting surface apparently attracts a litany of Instagram-worthy species.

The house itself, which was built in 2001, isn’t too shabby, either. And according to an article from ChicagoGolfReport.com, original designer Don Snelten — the father of former big league pitcher D.J. Snelten — spent around $50,000 recreating the Pete Dye masterpiece.

My favorite D.J. Snelten fun fact: This is what his parents’ house looks like. His father is obsessed with the TPC at Sawgrass. Rebuilt the 17th hole. In his *front* yard. The story is recommended reading. https://t.co/9qVIaQZHtd pic.twitter.com/Zv91rUiIf2

“I really did it for my own visual enjoyment and environmental ambiance,” the older Snelten said. “We see heron, deer, muskrats, bullfrogs, and turtles on a regular basis, along with other critters.”

When word of Snelten’s replica got back to the folks at Ponte Vedra Beach, they invited him to play the real thing.