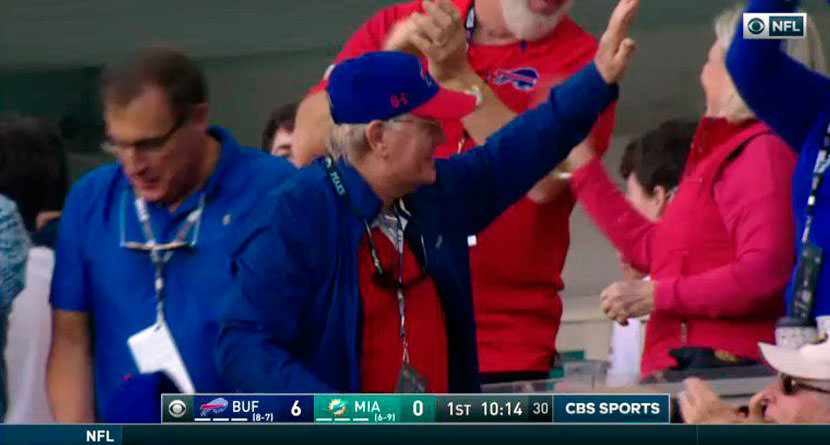 Jack Nicklaus is a man who knows a little something about writing his own history. The winner of 73 PGA Tour events and 18 majors, the Golden Bear is no stranger to primetime success. On Sunday in Miami, Jack was able to revel in one of his grandkids putting their stamp on the history books as well.

In search of the franchise’s first NFL postseason berth in 17 years, the Buffalo Bills and Jack’s grandson, Nick O’Leary, needed a win over the Dolphins and some help elsewhere around the league to make that playoff appearance happen. O’Leary opened the scoring in the first quarter en route to a 22-16 win.

The Bills would get the help they needed from the Cincinnati Bengals, allowing the Bills to make their first playoff appearance since 1999. O’Leary’s 26-yard touchdown catch was his only reception of the game.

Golfweek.com’s Kevin Casey had some more backstory on Nicklaus and O’Leary.

Jack Nicklaus is still a busy guy, but nobody can question that he remains a doting grandfather as well.

The Golden Bear recently competed in the PNC Father/Son Challenge with 15-year-old grandson G.T., a musical lad. G.T. is one of Nicklaus’ 22 grandchildren.

The 18-time major champion was known in his heyday to prioritize family, and that hasn’t changed at age 77. His most famous grandchild is likely Nick O’Leary, who plays tight end for the Buffalo Bills.

O’Leary was a standout at Florida State, so much so that his senior season he was a consensus All-American and the winner of the John Mackey Award for college football’s most outstanding tight end.

Despite those accolades, O’Leary was only a sixth-round pick in 2015 and was actually cut by the Bills soon after he was drafted. But he was then signed to the practice squad and worked his way up to the active roster.

He’s since earned some starts. Last season he caught nine passes for 114 yards and he’s done even better in 2017, entering the final week of the season with 21 catches for 296 yards and a touchdown.

It only got better Sunday, as O’Leary got himself wide open for a 26-yard touchdown (the second of his career) in the Bills’ regular-season finale on the road against the Miami Dolphins.

Although the Golden Bear recently quipped that he’d rather have a 19th major than see O’Leary catch a Super Bowl-winning TD, his being at this game if anything does not represent enough how devoted he is to keeping up with his grandchildren.